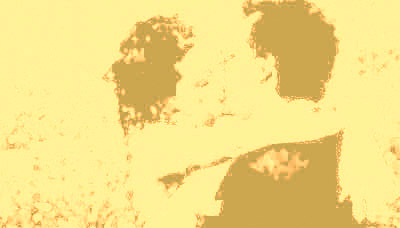 Against your best judgment, I went ahead and saw Kati by myself. At the time, I reasoned that I did not have any unethical motive. That it would just prove once and for all that I did not, could not, have any feelings for her, at least not beyond those that a brother-in-law should have. But in reality, I was just making an excuse to see her.

Ever since her party for her friend Geraldine, I felt so low. I stopped going to work, pretending that I was sick. I lost my appetite. It was really weird. I would get these frightening hunger pangs and run to the refrigerator, serve myself a huge platter of food and then, when I sat down to devour it, looking at the food before me, inhaling its odors of burning meat and sour legumes, I would be overwhelmed with the desire to vomit. I lost ten pounds since I last wrote to you. The only things I can’t get enough of are coffee and cigarettes. Nassim got so worried about me that she urged me to see a doctor. I kept refusing until she suggested that I see Geraldine at her health and wellness center.

I had briefly listened to Geraldine speak about her work at the opening of her clinic. A short, vivacious woman whose ethnicity I could not distinguish, Geraldine had talked about medical intuition and the need to combine conventional medicine with alternative, herbal and holistic remedies. Her audience was captivated by her words. As for me, I just stood there and listened politely for a while and then slipped out of range. To tell you the truth, she reminded me of one of those countless charlatans in Iran who take desperate people’s money in exchange for a cure for their cancer. I have always been very suspicious of these so called holy men and spiritual women who see the dead, or can tell with a touch of their hand on your body that your liver is sick or you’re suffering from bipolar disorder. Or god help us all, that you were a little eighteenth century Tibetan girl in your past life!

In different circumstances, I would have never agreed to waste my time at such a clinic. But when Nassim, with her own doing, gave me the green light to go back to the same building that Kati lives in, I decided to take the opportunity. I wasn’t planning to stay long at the clinic. Just make a perfunctory visit and then ring up Kati, hoping she would be available to see me. What did I think would happen between us?I didn’t even allow myself to think about that. At the same time that I was fervently wishing this meeting would happen, another part of me, the sane, rational, good part was hoping that she would not be home.

I walked into Geraldine’s clinic and waited for her assistant to show me the way to her office. As soon as I walked in the door though, Geraldine stood up and bizarrely, she put both her hands in front of her, as if to sway back some invisible evil spirits that were attacking her. With real alarm in her voice, she told me to go away, immediately. She could not see me at this moment because I had “too much negative energy. ”On my way out, her assistant apologized to me and told me Geraldine was too “drained” for the day to undergo another trying session and that I should make an appointment to come back.

I couldn’t care less. As soon as I exited the clinic, I called up Kati, my heart beating hard in my chest with each ring of the call that went unanswered. As I was about to hang up, she answered. I told her what had happened with Geraldine. She laughed, saying this episode definitely sounded like a “genuine Geraldine moment. ” She then invited me up. Her lunch order has just been delivered and there was more than enough for two.

We had a wonderful meal, full of laughter and anecdotes, which we told each other in between bites of greasy Chinese food. After all the calorie counting and organic or macrobiotic or whatever idiotic diets and nutrition regimes I have been subjected to at Nassim’s house, it was a huge release to be able to enjoy some junk food and cheap red wine at two in the afternoon. I didn’t want to leave after lunch and Kati made no indication that I was bothering her. We moved on to the couch, that same couch that I had imagined her so often nestled in. We chatted for a while longer then she excused herself to make a phone call and told me to make myself at home.

I grabbed some photo albums that were on her coffee table and started looking through images of Kati from her teen years to the present. There she was, wearing a Scottish kilt, crisp white shirt and tie, her arm around Sam’s shoulders. He was wearing the boys’ version of their school uniform. In another, she was pouting in front of the pyramids of Egypt, with Nassim and their parents in tow. I turned the page and found her with friends I didn’t recognize on a ski trip to Whistler. Another album began with an image of her soaked through the bone but grinning like a Cheshire cat after a rainstorm in Assisi. There were some artistic portraits of her in there too, black and white close-ups of her eyes, her mouth, her ear, her neck, taken by an ex-boyfriend perhaps, or a talented friend. There were loads of photos with different people, in seemingly every corner of the world. With each one, I felt this strange sensation inside the put of my stomach. It took me some time before realizing what it was:Jealousy.

It wasn’t that I was jealous over photos with old boyfriends, although there were plenty of those. I became conscious that I was becoming jealous of every moment, every smile, every experience and memory that I had not been able to share with her. I wished that it was me and not Sam that Kati had befriended in school and made her best friend, eventually turning him into the family’s informally adopted son. Or that it was me she was pouting at in front of the pyramids of Egypt. I wished that I had known her since childhood. And then, I came to the realization that I wished I had known her before I had known Nassim.

Payame aziz, it’s no use denying it any longer. I am in love with Kati. What a cruel irony it is to have given up on love and married for convenience only to have your heart burn with passion for your wife’s sister!I married the wrong sibling. That was my horrible mistake.

Not everyone is as lucky as you to have found your soul mate, someone who will stand back to back with you and tell the world: “Bring it on!”Someone whose absence, if only temporary, makes you ache in the deepest recess of your belly. Someone whose fleeting touch, fingers brushing against the back of your hand while passing you a plate at lunch, makes you shake with desire.

I have not found that with Nassim. For Nassim, an orgasm is something you get when there is a sale at the women’s shoes department at Holt Renfrew. A scintillating dinner conversation is when you argue about the number of calories you can save by switching to sugar-free yogurt. A fun-filled evening is going for coffee with her insufferable harpie of a best friend, Mitra, where they delight in likening their other female “friends” to four-legged canine creatures.

I already knew the truth the first day that I saw Kati, my own wedding day!But I lied to myself and to others. Successfully so, I thought, until you saw right through me, all the way from across the oceans and continents that separate us. You tried to warn me. But as usual, your little brother is a screw-up through and through. I wasn’t strong enough to resist that overwhelming wave of feelings that is now drowning me.

But don’t worry. I will never let this secret known to my wife or her family, much less to Kati. I am sure she does not reciprocate any of my feelings. She just does not think of me that way. She is too pure, too wise to ever fall into the kind of trap that I let myself succumb to. And even if she was willing, I would never heap such a miserable shame on you and our parents. Maman Joon would likely die, god forbid, from such an aberoo reezee. All the other stuff I put them through, my teen-age antics, my failed careers, my depressive periods, would seem like child’s play compared to the blow that would hit them should I act upon my feelings and tell Kati how I feel. I am neither as wise as her nor as brave. And in any case, it is too late for me. I am tormented day and night by a love that can never be. I know it will ultimately destroy me. Please say a prayer for me tonight, brother.