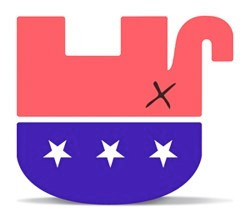 The American voters proved me wrong. They proved my scepticism that they (almost 75% white population) would not vote for a black man. I am actually glad that I was proved wrong and that Americans proved that they have so quickly moved so much, from slavery, and then segregation, to even electing a black president in such a short time; short for human social progress that is.

America is great because of its ability to progress, evolve, and become a better and better place. We can say so much about this election and there is indeed a lot to say. People my type do not usually get excited about much, especially individuals, and very often pretty much about anything. Others get excited, and then get disappointed. When you don’t get excited, you have less chances of disappointment too. Life seems a bit more boring like this. But it is a much safer place when you take the boring approach.

I remember it very well that so many were excited by Barack Obama’s candidacy, and many Iranians were (and still are) excited about it. I usually didn’t even dare to ask the very simply question, why! Why are you so excited? What is Obama going to do for you you can’t do for yourself? At the beginning I was turned off by Obama’s big-talk and little-sense, little-policy, approach. Then he started to say a few things about what he was going to do. When I read, and heard, about his left-leaning policies and plans, then I liked none of them.

I can’t say I liked everything McCain said, but I agreed with a few, especially about his steadfastness on terrorism, and the war in Iraq. The tax cuts both Obama and McCain promised seemed really out of touch with reality, as I wonder who is going to pay for all the budget deficit that is getting bigger and bigger, while everybody is promising tax-cuts after tax-cuts. I wouldn’t mind a tax reform in which investment is promoted and consumption taxed more heavily, but simply going with tax-cuts America will do nothing but expect much worse financial and economic problems in the years ahead.

Anyway, beside this, just from the beginning I didn’t quite understand what was all about Obama-mania, and why so many people cheered him. I listened to some of his speeches and I actually started to understand that most of his attraction came from his exceptional oratorical abilities. He is indeed a great orator and he knows how to talk to the masses. Then again, I always wanted to ask people why they loved Obama so much and what he was going to do for them, and I never really got any serious answer. They usually said “change”.

Change to what? Oh, so, it’s not really about change to ‘what’, but change ‘from’, and that is where I got my next answer. That Obama in himself was not actually the reason behind his success, but it was George W Bush who was behind Obama’s success. Obama presented the opposite (the most opposite) of everything Americans had started to hate about Bush. This is where I reached a satisfying point to my pondering. Obama, poor Obama, was the victim of the American hatred toward Bush. Okay, so let’s not go too far with it. I doubt Obama didn’t (and doesn’t) like it. It’s quite nice to be the president of the United States, and even (absolutely) worth risking your life, and time, for it.

With all the hatred toward George W Bush and all that he had said and had been proved wrong, and with all the mistakes that he had made and all the paths that he had taken, and proved wrong, I still didn’t think the Christian white American majority would vote for Obama. I still thought McCain would win. I didn’t side with either Obama or McCain, but I actually believed that America would not vote for a black man! And I expressed my belief publicly. And at the end of my article I had written that “The main issue for the Democrats to have the slightest chance of winning these elections is to emphasise on their policies and attack the usual right-wing policies of the Republican party. This way they can attract voters who are concerned about the economy, because the US economy is in trouble and many ordinary Americans are already feeling the pain.”

Most of the polls at that time (around 10 September, when I wrote the article) were indicating a slight lead for McCain. Then, 14 September, came the bankruptcy of Lehman Brothers, and everything that came afterwards, with the financial calamity that followed, form which the whole world has not yet recovered. And this final blow to the George W Bush legacy was what turned everything around, and turned a man who presented nothing but the opposite of George W Bush into a real choice for those who did not hate George W Bush enough to forget about their inner, more or less radical, racial prejudices.

Now all this is behind us. I may still ask people why they love Obama so much and what Obama is going to do for them, and I will still find no coherent and convincing answer. But one thing I really, really, like about Obama is actually the fact that he is black. I am sure many other people feel like this right now, and many others feel the opposite too! He is intelligent, calm and tenacious. Throughout the difficult campaign he has shown his leadership abilities. So there is no doubt he can be the leader of the Unites States of America. And the simple fact that he is black is the greatest thing about him.

America today is not the America before this election. America has moved beyond its shameful history of slavery, the human ownership, and there could have been no better a chance to prove this but by having elected a man of the same colour who were treated so badly for so long. Will this event, the choice of Barack (Hussein) Obama, as president, convince extremists (Muslim or non-Muslim) and conspiracy-theorists that America is indeed a genuine democracy where everything is possible? No.

The important thing though is that America itself is moving forward, and the rest of the free world is following. And the free world needs more cooperation in order to protect the values that bond them from challenges that lie ahead from imperialistic and antagonistic regimes like those of Russia or Iran. And Obama seems to be a much more appropriate man (than George W Bush) for this task, of bringing together the leaders of the free world, in order to protect the values of freedom and democracy, for which so much has been paid (especially in lives) throughout the last centuries.