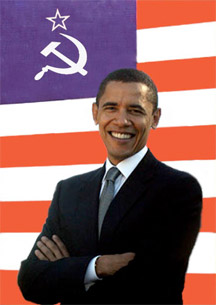 The word socialist has been bandied about more in the past few weeks than it has since the early 1990s. John McCain was asked whether nationalising banks was not tantamount to socialism – remarkable, a mainstream network airing the s-word in an interview with a US presidential candidate. In Britain the word socialism is regarded as a terminal virus the Labour party sneezed out in 1994 when the then opposition leader Tony Blair ditched Clause 4 — along with its commitment to “the common ownership of the means of production, distribution and exchange”. After Labour came to power in 1997, its use was phased out.

Now that capitalists themselves are forced to accept that a system that rewards complete bastards, for being complete bastards, is doomed, “redistribution of wealth” and “socialism” are out of their cages. Quite what they mean is a different matter. In the run-up to the US election, socialism had turned into a euphemism for black. “I’m not voting for Obama because he’s a socialist” had less to do with any pledge he had made – to create a system of free healthcare for all at point of use or to lift the trade embargo on Cuba – and more to do with his ethnicity. Asked to define socialism, one caller to a New York public radio phone-in rambled incoherently before saying: “Marx! It’s about Karl Marx.”

In one of the first signs that the world is changing in terms of racial politics, demonstrators took to the streets in Rome yesterday after Silvio Berlusconi referred to Obama as “sun-tanned”. The young protestors were keen to show the world they are not retarded even if their prime minister is. And perhaps, unlike Berlusconi, they knew that a hundred years ago, immigrants to the US from Italy suffered similarly ignorant jibes and prejudice at the hands of their Anglo-Saxon hosts.

One day, our skin-hue obsessed world will allow the mixed-race person to choose whether he, or she, is black or white. For now, though, we can bask in the honeymoon the mere complexion of this capitalist and pro-Israel president-elect affords us in the hope that, one day, the US will pick a leader who is young, gifted and Red.