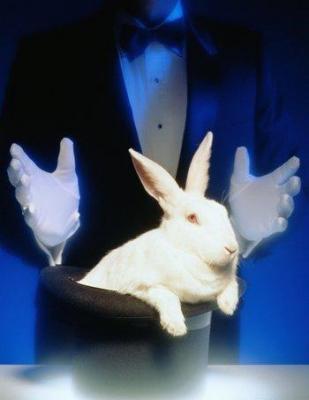 Beware of rabbits! Not the kinds that freely live in the nature but those that come of the magician’s hat. The kind that we don’t know where they really came from and how they were planted there!

We have seen many such rabbits and magicians in the developing countries from Latin America to Africa and the Middle East. I am not only talking about the rigged referendums such as Saddam’s 100% vote before US attacking Iraq, but I am also referring to those elections that may not have been planted such as the election of Hamas in the Palestinian territory or the previous election of Islamists in Algeria. History of the last centuries are filled with such examples.

After so many years of struggle by many individuals and groups, in 1978 Iranian people came to the streets in millions demanding democracy but once the dictatorial regime of Shah fell, with a quick twist of events, a referendum was put in front of the Iranian people and the unfortunate 98% approval of the Islamic Republic resulted in a history that we still live with. Elections such as the presidential and parliamentary votes in Iran during the past 30 years are other examples.

Although such elections and referendums may create the illusion of democracy but in reality they are not much different than the illusion of a rabbit jumping out of the magician’s hat.

For the past few years certain Iranian oppositions, activists and intellectuals have called for a future referendum to decide the form of the future government of Iran. Although many have good intentions but the motives of the certain magicians behind this call are much different than the goal of a future democracy for Iran!

After the future fall of the Islamic Republic, the magicians do not want Iranians to have an ultimate and ON-GOING say in their future affairs but instead they want people to once again hand in the power to the new magicians in charge.

After the fall of the Islamic Republic a Secular Republic is the only valid option that exists for Iran. This is the only alternative that would freely allow all Iranians from left to right to freely participate in. Secular republic is our only choice IF and only IF we do not want to live under another dictatorship again.

Under a secular republic everyone can have a voice and everyone will have a chance to be in charge BUT NOT PERMANENTLY!

Under a secular republic, no one has the ultimate rule; no Royals, No Imams and NO SPECIFIC IDEOLOGIES. Everyone can form a party, promote its thoughts and ideologies and then run for different posts from cities to Provinces , from parliament to presidency.

If people and parties are properly informed and organized in a politically open environment then everyone has a chance to implement its ideas and if elected and their ideas are successful, they will be voted back in and if not, another person and another party will have their chance.

History has repeatedly proven that referendums in environments where there is not enough time, organizations and education to make informed decisions are prescriptions for more rabbits coming of the magicians hat and more decades of dictatorships under one name or another.