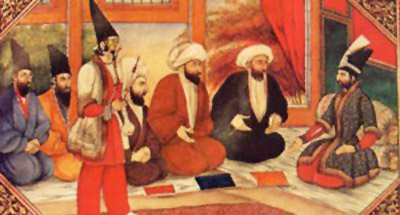 The new Khan of the united Mongol tribes (Genghis) was rapidly expanding eastward into the Chinese territories, but apparently; he was considering Iran more as a potential trade partner towards Europe, rather than an immediate target. Therefore, Genghis was astonished when the riches of a Mongol caravan were confiscated by the border guards of Iran, and all the 200 merchants and guards were executed. He sent another group of emissaries directly to Khwarizm Shah’s court with a plea for retribution, but they too were killed! In response, the angered Mongol chief sent a massive army of 200,000 murderers into Iran.The first wave of Mongol invasion (1220 to 1224) destroyed most of the Khorasan cities (the cradle of Farsi civilization), killing millions and enslaving millions more! All eastern centers of Iranian culture, agriculture and business were irrevocably destroyed or devastated. Genghis wanted such a bloody revenge on the Eastern Iranians that the rest of the country would collapse in fear, therefore, his army spared no brutality on the general populace.

The second wave of Mongol carnage (1260 to 1275) was unleashed by Hullago the grandson of Genghis, who invaded central Iran all the way to Baghdad and Syria! He even killed the Muslim Caliph and destroyed all the Esmaeli castles. This carnage put an end to the ‘golden age of Islam’ and plunged the Muslim world into 200 years of darkness. The third wave (1365 to 1405) was carried out by another murderous Mongol descendent (Tamerlane), who this time under the banner of Islamic Jihad, ravaged Iran, Turkey, Syria and even parts of India; killing, burning, pillaging and destroying everything in his path.The total Mongol carnage and the ensuing famines and plagues are estimated to have killed about 50 million people, or half the population of the Middle East! That senseless barbaric blow destroyed most of the Arab and Iranian urban centers, and stunted the development of Islamic civilization for centuries. All that took place, just as the European countries were waking up from their long slumber and entering the Renaissance period.

After Tamerlane, Iran was again divided among feuding Mongol and Turkic tribes, who established several small khanates. Their fighting and consolidation took another 100 years, before a confederation of tribes (Ghezelbash) united around a spiritually mesmerizing Iranian family, the Safavids. The Safavids were a powerful Shia-Sufi cult, who had started in Ardabil and expanded into the rest of Azerbaijan and Gilan. Tamerlane who was also Shia, had granted them some land and thousands of Turkic slaves, whom he had captured during his Asia Minor campaigns.It took the Safavids fifty years and three generations of warriors to gain the control of north western Iran. Finally, their young and charismatic leader crushed the resistance of rival Turkic tribes and was crowned as Shah Esmael, in 1501 at Tabriz. The fifteen year old Esmael was so inspiring, courageous and heroic that many of his followers believed him to be the Shia messiah (Mahdi).

In ten short years, Shah Esmael captured all the traditional lands of Iran and became a neighbour of the Ottomans in west and Uzbeks in east, both Sunni Muslims.Unfortunately, instead of building trade, cultural and military alliances with the neighbouring Muslim nations, the fanatic Safavids attacked first the Uzbeks and then the Ottomans. This started 350 years of animosity that bleed all three nations’ strength, like a chronic infectious injury. At the beginning of those wars, the Ghezelbash were jubilant that their invincible messiah would soon take over the world! Indeed, Esmael looked unbeatable too, until the more modern Ottoman army equipped with rifles and artillery, defeated him in 1514 at Chalderon.After the defeat of Chalderon and the collapse of Tabriz, the Safavids had to flee and move their capital to Ghazvin and then Isfahan. The crazed and frustrated Ghezelbash took revenge on the indigenous Sunni population of Iran (approximately 75% of nation) and forcefully converted most of them to Shia and killed or harassed the rest.

After Esmael, Shah Tahmausp came to power, who imported many Shia clerics from Lebanon, in order to strengthen the Safavids ideological hold on the Iranian society. Those clerics soon proliferated in the central Iran and especially Isfahan, and established such a priestly caste that was unprecedented since the time of the Zoroastrian Moubads.After the half-century reign of Tahmausp ended in 1579, the country descended into fierce fighting among his many sons and successors. Finally, after eight bloody years, the young and energetic Abbas came to power, who built the fledging kingdom into a powerful empire.Shah Abbas (the great) revived the Iranian army through close ties with the emerging European powers, especially the British. He also curtailed the wanton hold of the rival Ghezelbash tribes throughout the country, and established a sense of normalcy and security.

With those improvements, the nation prospered and the Safavid’s military might grew. Abbas defeated both Uzbeks and Ottomans, obtaining more favourable border arrangements in Khorasan and Mesopotamia.Sadly, like most dictators, Abbas could not escape the corrupting influence of absolute power, and near the end, turned neurotic and suspicious. He killed and blinded so many of his sons and other male Safavids that after his death, finding a successor became a challenge. His suspicion and bloody suppression of the Ghezelbash nobility, also, alienated most of them from playing an active role in the kingdom. Hence, despite his many contributions to Iran and especially Isfahan, the Safavids started a steady decline after Abbas’s passing in 1629.

Reference: Iran under the Safavids, by Prof. Roger Savory.