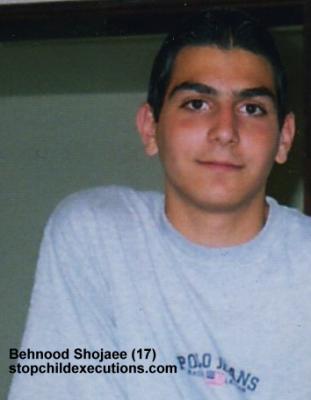 Behnood Shojaee, a juvenile on death row is in imminent danger of execution and is to be executed in less than 48 hours!

Despite the fact that his execution was postponed three times, a formal statement from the European Union was released condemning his execution, a joint letter and press conference by 24 human rights groups was written, help from celebrities, and a reduction in blood money, Behnood Shojaee faces execution on Christmas eve.

Two and a half years ago, 17-year-old Behnood Shojaee was convicted of killing a 19 year old boy named Omid during a street fight involving over a dozen boys.
Shojaee says that he tried to stop the fight and used a chard of glass from a broken soda bottle in self defence. He said he hit an attacker once only with the piece of glass. Shojaee’s lawyer Mohammad Mostafaei argues that the coroner found several wounds by various objects making it unable to assess who was responsible for the fatal blow causing death.
At first the family of the victim wanted over 2 million dollars US in “blood money” compensation. After months of negotiation, and his execution being postponed three times, the “diyeh” was reduced to approximately $625,000 USD.

Shojaee who grew up with his grandparents since the death of his mother at age 10 from diabetes and a father living with depression from his tragic loss, he could not afford the required “diyeh”.
Three of Iran’s most prominent movie directors and actors ( Entezami, Parviz Parastooyi and Kiymars PoorAhmad) opened a joint account to help raise money for his “diyeh”. In an unprecedented measure, the Iranian judiciary froze the bank account, summoned the artists and threatened that “they shall be investigated and it shall be assumed that they are not aware of the special laws that were passed in 1997 by the State Expediency Council which have strengthened the punishments against corruption, embezzlement, and misappropriation and which carry punishments ranging from one to seven years of prison”.

On May 23rd 2008, in a joint statement, 40 European countries condemned the execution of Behnood Shojaee.

In August 2008 in a press conference in Geneva and one put on by Stop Child Executions in London, 24 human rights organizations demanded Iran to Stop the execution of Behnood Shojaee and Mohammad Fadaee as well as the 132 children on death row at the time.
Despite the international pressure, Shojaei could be executed in less than two days.
This is our last chance to save Behnood Shojaee’s life.

Stop Child Executions has informed the office of the High Commissioner on Human Rights at the United Nations, members of the Canadian Government and members of the EU.
We need you to bombard the phones, faxes and email of the head of Judiciary in Iran Ayatollah Shahroudi