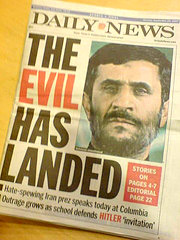 Six of every ten Americans believe Iranian Americans generally share the same values as most Americans, while a near equal number also believe the current government of Iran does not represent the values and views of a majority of Iranian Americans. Furthermore, four of five Americans say they are not suspicious of Iranian Americans because of their national origin, with two-thirds considering them to be Americans as opposed to Iranians. If, however, there were a military confrontation between the United States and Iran, that number would drop considerably to fifty-eight percent.

Even though half of all Americans view Iran as a threat, a significant majority of more than sixty percent (60%) oppose military options in dealing with Iran. Moreover, nearly half of all Americans believe diplomatic negotiations would be the foreign policy approach towards Iran that would be in the best interests of the United States.

More than half of all Americans believe Iran has a right to peaceful nuclear technology. Moreover, two-thirds of those surveyed believe diplomacy can dissuade Iran from developing nuclear weapons, whereas slightly more than one-third believe economic sanctions could achieve the same objective.

For a Copy of the Complete Survey, click here.