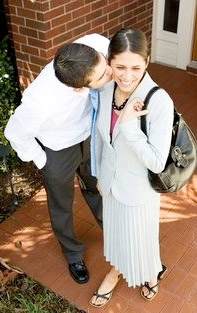 We would be playing in the street in the evening and I would see my American friends’ fathers come home from work and kiss their wives and I would think, my secret’s out.

There it was for all to see. I used to wonder how the street didn’t freeze in time just then. I used to wonder even more how the American father could go straight from the kiss to talking about his day or the traffic.

It was a secret because we were Iranian and I felt like I was the only one at home who knew that it was nice for a man to kiss his wife when he came home from work. My father came home with important things to say, and a strong and proud voice for saying them. There was a revolution happening in our country after all, and a kiss could seem like a very small detail in comparison.

There was nowhere I could go with the secret, when it came back to me. To Americans it was ordinary, and Iranians had other things on their mind. A little while after the revolution, two of my American friends whose fathers I’d watched told me that their parents were getting divorced. I knew it, I thought. A man can’t go straight from kissing to talking about his troubles at work. He needs to fall down and melt first, and then do his talking after he’s gotten back up.