Rebel with a pause 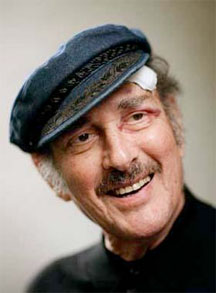 News of playwright Harold Pinter’s death arrived in primetime, Christmas – a religious date, in Britain, for watching telly. You couldn’t escape the news and the news couldn’t escape reporting on Pinter’s final years and his opposition to the war in Iraq, as well as his monumental literary achievements. His stance on the war demanded to be featured in the briefest of TV obituaries.

Of course, in the BBC News bulletin I caught, there was no mention of the fact that, in accepting his Nobel prize for literature in 2005, he had called for Tony Blair to be prosecuted for war crimes. That would have been too much given the mince pies, turkey, pigs in blanket and booze viewers will have been digesting – going after Blair would, after all, mean hauling key government figures into the dock, too, such as justice minister Jack Straw or even prime minister Gordon Brown and we need him to steer us out of the economic downturn.

Pinter’s death pushed Her Majesty into being the news programme’s second item. In her speech, she had wasted no time in reminding us that troops in Santa hats are still risking their lives for us in Iraq and Afghanistan.

In his video address to the Nobel prize people three years ago he said: “The invasion of Iraq was a bandit act, an act of blatant state terrorism, demonstrating absolute contempt for the concept of international law.

“The invasion was an arbitrary military action inspired by a series of lies upon lies and gross manipulation of the media and therefore of the public; an act intended to consolidate American military and economic control of the Middle East masquerading – as a last resort – all other justifications having failed to justify themselves – as liberation. A formidable assertion of military force responsible for the death and mutilation of thousands and thousands of innocent people.

“We have brought torture, cluster bombs, depleted uranium, innumerable acts of random murder, misery, degradation and death to the Iraqi people and call it ‘bringing freedom and democracy to the Middle East’.

“How many people do you have to kill before you qualify to be described as a mass murderer and a war criminal? One hundred thousand? More than enough, I would have thought. Therefore it is just that Bush and Blair be arraigned before the International Criminal Court of Justice.”

While tributes have poured in for Pinter, the ultimate tribute to him will not be paid as the unrepentant duo remains outside the grasp of justice.

In 2003 I went to a Stop the War Coalition meeting in London where I heard the great man speak. In the middle of his speech he was heckled – it was a friendly heckle, in support of what Mr Pinter had been saying but clearly an unwelcome interruption. Mr Pinter responded with a pondering silence before resuming his sentence. “It’s a Pinter pause!” I nearly shouted. Perhaps that’s all his passing is.