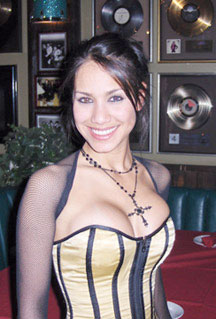 One look at me and Seema knew she had a customer (sucker) for life.

Now, make no mistake about it, though a high school dropout, Seema had a PhD from the school of hard knocks. In her profession she needed not to be book smart but street smart. Seema hustled the hustlers, cheated the cheaters and swindle the swindlers. She was such savvy negotiator that she could perhaps negotiate the Middle East peace, if she could find the Middle East on a map.

Seema understood that she possessed a commodity that had certain attainable consumer demand and a sustainable market value. She also realized that men are willing to pay premium price to salvage the same stinky merchandise that has been used and abused by hundreds of other men in regular basis. Translation: men will pay to screw anything that breaths and bleeds.

It’s a fact that all successful prostitution rings maintain three essential elements: a hooker, customers and a pimp. Yes, Seema had a pimp and his name was … Javad.

Javad was a massive ex Iranian national team wrestler who worked as head bouncer at the Hollywood nudie club where Seema made frequent appearances. Rumor has it that Javad came close to winning a gold medal in the Goodwill Games but he was disqualified for sticking his thumb up his opponent’s ass while in a headlock. The thumb-rape almost saved Javad from a disasters defeat.

Turns out that it’s a tradition in Iranian wrestling for one to stick his thumb up his opponent’s behind when he is trapped in a painful headlock or pinned down to the mat. The stronger wrester’s sudden reaction to stimulation of his man-hole would allow the weaker wrestler to escape a likely defeat.  Javad however made a crucial mistake. He did not realize that the referee had his nose a few inches from the other wrestler’s ass and ESPN cameras had a very good view of the entire event. The incident was reviewed in slow motion by judges and Javad’s opponent ended up with a gold medal and a sore ass.

As for Javad, he applied for political asylum and started his illustrious career in bouncing and pimping.

Javad’s intimidating appearance, dazzling wrestling skills and crude demeanors made him a legend in LA nightclub underworld. Javad was sadistic and ambitious. He made a name for himself by beating the crap out of a group of unruly Oakland Raiders’ linebackers who were terrorizing customers at a private nightclub. The linebackers decided against pressing charges, citing that publicity and the embracement of being collectively beaten by an Iranian immigrant might negatively impact their careers.

Javad saw opportunities in America. He soon realized that he lives in a country that the aggressive thrive and the weak only survive. He wanted it all: money, women and respect. But most of all he wanted to be feared.

Javad shadowed Seema for months, asking her to marry him repeatedly. Little did he know that Seema was the devil in disguise.

Understanding the value of having a devoted and strong man like Javad on her side, Seema played the poor chump like a violin and took advantage of him in every step of the way. Javad practically became her chauffeur, butler, bodyguard, cook and enforcer. Javad didn’t seem to mind. All he wanted was to be around her.

To return the favor, Seema gave Javad occasional freebees and introduced him to the celebrity crowd. Javad on the other hand was incapable of controlling his joules rages and often roughed up Seema’s clients. Seema put a stop to that by threatening to cut all ties if the behavior prolonged. Javad got the message and stopped beating Seema’s top clients. However, the resentment and fury remained strong.

Javad imagined marrying Seema and returning to Iran with his beautiful bride. He pictured Seema living with him, his mother and siblings in his house in southern Tehran. He believed that deep inside, Seema was a righteous human being who had lost her way in this crazy dark world and faith had brought them together. Seema on the other hand saw Javad as a naïve FOB who would break his back to make her happy.

When informed by Seema that destiny awaits her in Las Vegas, without hesitation, Javad packed his bags and followed her to the Promised Land. He couldn’t bare the thought of being without her even for a day.

Javad followed Seema from one casino to the other, mostly staying out of sight, eyeing her from the distance. If a potential customer got aggressive or abusive, Javad quickly moved in and all hell broke loose. In a strange way, the relationship somehow worked.

Now back to my first encounter with beautiful Seema…