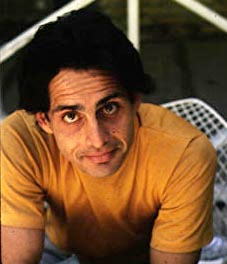 A nice email I received about my Uncle Siroos — my favorite uncle. He was gentle, he was wild, he was a great athlete AND scrabble player! A total romantic. Whenever he visited Abadan, we would play tennis early in the morning. He made a grunt every time he hit the ball. Adored him — everyone did. He drowned in the Potomac River (Washington, DC) on a stormy day trying to swim to shore when a boat he was on capsized.

It is a great surprise to stumble onto your description of your uncle and my good friend Cyrus Bakhtiar.  It was in 1969 that he was serving on the clinical staff of the Vermont  State Hospital in Waterbury and living alone in the nearby hills, commuting daily in his ancient yellow VW beetle with only one seat and running the local roads for miles and miles in training for the Boston Marathon.  I was with him when he crossed the finish line in that race; he was living then on Peace Street in Providence, R.I., and starting to call himself  “Tan” Bakhtiar.

The photo of Cyrus that you attached to your posting is the only one I have ever seen, and though it’s from a few years later than I knew him, it comes with the shock of recognition and the sadness of learning of his untimely death.  The last word I had from him was in 1970, saying he intended to return to Teheran and would give the large pot I made for him to his sister.

I have many memories of walking together (“walkie-talkie” was  his term) among the forested hills of central Vermont.  I believe I recall that he was trained as a pathologist and once contemplated doing a study of suicide leapers from the Golden Gate Bridge.

A vigorous and cheerful man, really unique–unforgettable.  I’m sending your piece along to a mutual friend, Susan Tarshis, to whom he once gave a lift when she was hitching across the country–all the way to California.  She’ll be amazed.

Thank you sincerely, for your posting, and my very best wishes to you, nephew of Cyrus.