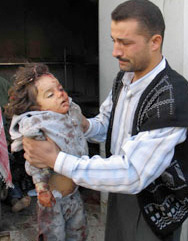 The Palestinians have been suffering for over 50 years. Their experiences if nothing else, proves one thing. If you are going to get mugged, get mugged when you are alone.

That way, when the guy grabs your wallet provoking you to knee him in the groin and he recoils in pain so you’re able to grab your wallet back, no one is going to think the worst of you.

From Beijing to Portland, from Brazil to Alaska, every lawful society acknowledges the in-alienable right of self-defense. The mugger is the aggressor and the one being mugged is the victim. Case closed.

However, should you have the misfortune, much like the Palestinians and you’re mugged while in a group, you’re out of luck. It would seem, witnesses to the Collective Mugging are at loss to demonstrate a rational response.

Mega Media is provocative and mind-numbing, so much so, it can near decimate the general public’s capacity for simple logic. If it’s wrong to mug one person, then it is that much more wrong and offensive to mug a collective of people.

Not if you are Palestinian and your mugger is the collective called the Zionist mob and their tool the Israeli settler.

The Collective Mugger grabs for your collective wallet, so as a collective of Palestinians you resist, you try to get your wallet back. You look around for support, not even logistical support, perhaps just moral support would be enough.

But all you get are accusations and charges that as a collective of Palestinians who are nothing more than violent, reactionary terrorists. Then they throw white phosphorous at your kids.

Why? Because as a collective of individual Palestinians, you didn’t want to be separated from your Palestinian wallets?

PS: I might add that ‘mugging’ as an analogy fails.