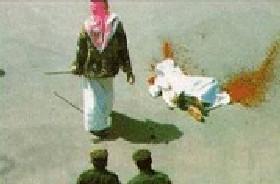 January 15 2009 – Saudi Arabian minor convicted of murder was beheaded by the sword in the south-western border town of Abha.

Moshabab bin Ali al-Ahmari used a machine gun to kill compatriot Said bin Abdulrahman al-Ahmari because of a dispute between them, the ministry said in a statement carried by SPA state news agency.

and Hands off Cain: