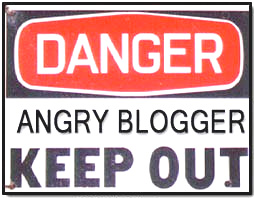 I was reading the other day that to protest the massacres of Palestinians in Gaza, a popular political blog community has asked its members to stop blogging and go on a symbolic strike for one day. The idea was to call attention to atrocities committed by Israel by denying readers access to blogs for 24 hours.

Shit, I’m all for that. As a matter of fact, I’ll pay all the bloggers around the world to take a week off and let the fucking internet breath.  Do you bloggers ever take vacations? For god’s sake, stop polluting the internet with your self-serving, virtual hallucinations? Don’t you guys have jobs? How come your laptops don’t get infected with virus?

There used to be a time when you fought your enemies in trenches with a hole in your belly and a gun in your hand. That’s what Hamas and IDF were doing. But the most entertaining part of this conflict is the blogger community, on the sideline, who actually believes that it has a part in this debacle. Surely, nothing is easier than sitting in the basement of your parents’ house in North America and telling Gazans and Israelis “Lengesh Kon.”

I was reading this blogger dude in Texas who was inviting the Palestinians in the West Bank to rise and pick up arms. He then posted pictures of his vacation to Caribbean. Fuck you. Why don’t you putdown your keyboard, travel to Gaza, put on a diaper and shoot the enemy. I was watching an online debate between an Israeli female and an Arab male blogger about the recent conflict. The debate quickly turned into a shouting match; I could feel the sexual tension and I was thinking: forget blogging, marry each other and start a family.

I know it makes you feel better about yourself when you think you’re somehow a part of a struggle. You think you’re educating the ignorant … informing the uninformed … changing minds. You are not. Nobody reads your blogs except for your mother and the neighborhood pedophile who is watching you from across the street.

The problem is that both sides (Hamas and IDF) are assholes and innocent bystanders on both sides always get the shaft. It’s hard to take sides.  But it’s always easier to ask other people to do the dirty work for you. Heck, I’ve been asking Iranians to overthrow the Islamic Republic for years from a Starbucks on 3rd Avenue, while sipping organic Colombian Narino Supremo and surfing the net.