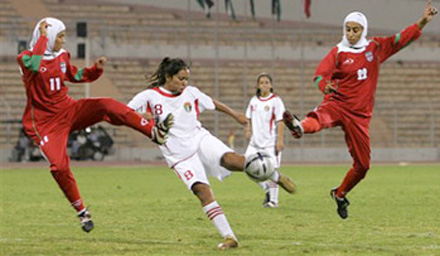 Something interesting happened in the city of Tehran on January 20th. For the first time in the history of the Islamic Republic of Iran an all-female soccer club played a match against an all-male team comprised of players between 15 to 18 years of age.  As expected, the event did not sit well with Islamic authorities and coaches of both teams were fined and suspended.

The managers of Estegllal soccer club who organized the match were hoping that the incident would quickly blow over… not a chance [see BBC: Iran mixed football match furore]. During Friday Prayers a few mullahs in smaller towns dedicated a large portion of their sermons to the incident and spoke of moral decay of Iranian men and women and the government’s inability to maintain decency and virtue in society.

A clergyman even went as far as suggesting that some of the female players might have been sexually violated during the match and the authorities need to check to make sure that all the women in the team still have their virginity intact. The mullah was merely alluding to the possibility that during a slide tackle, the male genital might accidentally penetrate the female player and a quick ejaculation could result in unwanted pregnancy.

Under normal circumstances I would’ve questioned the validity of the gentleman’s statement but since mullahs have mastered the discipline of “female virginity fortification,” I must admit that there might be more to this than meets the eye.

Growing up in southern streets of Tehran, we often suckered girls in the neighborhood to play soccer against us. Though innocent in the eyes of a casual onlooker, the whole idea was to grope the girls as often as we possibly could while trying to take away the ball. I also recall slide tackling a few of them from time to time. It was long ago and my memory is foggy.

I perhaps should take this opportunity to apologize to any of the neighborhood girls that I might have penetrated during my slid tackles. And if any of them got pregnant by my nanosecond ejaculation, I’m willing to pay child support — if proven that the child belongs to me (oriental or black children need not apply). There was a reason they called me Speedy Gonzales and it had nothing to do with running.

The January 20th soccer match ended up with the male team defeating the females 7-0! Thank god for that. Imagine what would have happened if the female team emerged victorious. Had that happened, I assure you that shit would have hit the fan. A defeat by a group of subhuman, second-class citizens, who shouldn’t be playing sports to begin with, would have damaged our fragile Persian manhood and enticed mullahs to arrange for swift trials and execution of players and coaches of both sides with a majority public approval.

The real rationale behind the whole event is unknown. Some believe that the match was arranged to provide the female team with exposure to better competition since the number of female soccer teams in Iran is limited. Others believe that the match was arranged to humiliate the women and remind them that they have no business running after a ball. Regardless of the intent, nothing is more entertaining than social mishaps taking place in countries that claim to have monopoly on morality.