We made a big mistake 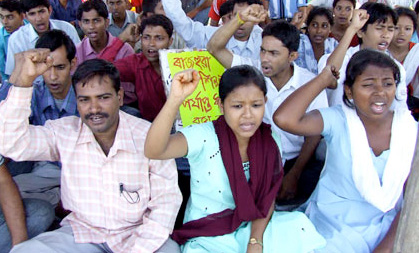 Last night I went to see the movie “Slumdog Millionaire”. It was a good movie, and brought back some bitter-sweet memories.

I was visiting India for a few days, in early 1980’s. I found India an interesting country, with ancient culture and history, beautiful natural scenaries, dense population, rich and poor living side by side, and democratic.

But, what took most of my attention, coming from Iran after the revolution, was the intense clash between Hindus and Muslims. Every night on TV, I watched burning maabads and musks, put on fire by someone affiliated with the two religious groups.

On the third day, a tour bus took us to the Taj Mahal, one of the Seven Wonders of the World. It was amazing. An architectural jewel made by a king, in memory of his wife, that had been kept nicely for centuries. After the tour, while I was waiting for our tour bus, I saw a large group of young Indian men, gathering in one corner, arguing, pushing, and pulling.

I walked slowly towards the group, and with a loud voice said “Hay guys, what is the problem?” I guess, my intrusion was so unexpected that, they all turned around, looked at me, and one of them said, “ Who are you?” I said, “I am a tourist from Iran. Whatever the reason for your arguments, you should do it peacefully, just as your leader, Gandhi, did to achieve his goals.”

They responded, “It is easy for you to say that! You Iranians did your revolution, got what you wanted, and now you preach us to do against our will!” I said, “That is exactly why I am talking with you. We made a big mistake! Before the revolution, we were one of the most advanced, prosperous, and relatively free people in the Middle East. We wanted a little more democracy and financial opportunity for all. But we lost everything we had, and fell from a ditch to the bottom of the well! (As chaleh be chah oftadeem!)”

They said, “But, we see on CNN that Iranians are happy, and better off after the revolution!” I told them, “Do you believe in CNN, or an Iranian who lives in Iran, and has come to India, three days ago?” At this time, I noticed that my tour bus has arrived, and people are getting into the bus. I said “Bye”, and rushed back to the tour bus.

Almost thirty years later, I find India stronger, economically and socially in a better position, and still remains democratic. On the 30th anniversary of the Iranian revolution, I wonder, what could have been the situation of Iran and Iranians today, had we acted wisely and responsibly, for the past three decades!