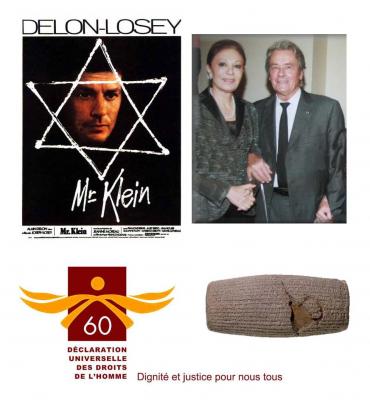 Both a thriller and a Kafkaesque dissertation on identity, Joseph Losey’s Mr. Klein stars Alain Delon (Le Samorai, Le Cercle rouge) as Robert Klein—a charming and unscrupulous art dealer in Nazi-occupied France. As Jews flee Paris, Klein exploits them, preying on their desperation by buying their valuables at a fraction of their worth…until he finds his name is shared by a Jewish criminal who is a member of the anti-Nazi resistance. Klein reports this to the authorities only to find he is uncontrollably sinking into the quicksand of mistaken identity. Co-starring Jeanne Moreau (La Femme Nikita), Mr. Klein is an award-winning suspense classic that studies the ever-changing relationship between victim and oppressor. Full Cast

“Monsieur Klein (Alain Delon,whose performance is hauntingly memorable) is a bon vivant.A bourgeois vulture who buys paintings and other works of art for next to nothing from the Jews during the Occupation in France.One day,he receives a news paper called “les informations juives”.Thus he discovers he’s got a namesake.At first puzzled,Klein becomes more and more involved in a search of this man ,his doppelganger,his twin,who plays cat and mouse with him.Both realist and dreamlike,not to say nightmarish,à la Kafka,and metaphysical,à la Borges ,as the precedent user wrote,Klein’s quest is both mad and logical,absurd and passionate.A sublime sequence shows Delon in a crowded café :a waiter ‘s calling “Monsieur Klein”;first he does not care because he knows “they ” call the “other”,but finally,he asks the waiter who tells him that the person who called “Monsieur Klein” looked just like him.Then the baffled Delon sees his reflection in a mirror.

In 1942,in Paris ,there are ominous plans.In the desert streets ,in the small early hours,French gendarmes silently move ,as if they are rehearsing for something better left unsaid.The color movie almost turns black and white in a riveting cinematographic tour de force.

Robert Klein becomes like Lewis Caroll’s Alice in the well.He could avoid the fall,but he will not.His world,now that he’s a suspect for the police,is collapsing.It’s his turn to sell his valuable properties for a song.

In the vel’ d’hiv’ (winter velodrome),the roundup of Jews had begun.Klein could escape,because his lawyer found the papers that proved that “he ‘s got no Jewish blood in his veins”,but he would like to know this other himself and he would follow him even if it were into hell.It was indeed,as the train slowly moves off,heading for the concentration camps.

Scene of the deportation of Val d’Hiv (CANNOT BE EMBEDDED)  :

Arrival at Camp of Val d’Hiv:

Winds of War:Delon in French Russian Film Tehran ’43 by DK

PrevPreviousShoe thrown at Israel’s ambassador AND IT HIT HIM!!! :-)
NextIran’s Fist Is Clenched for a ReasonNext