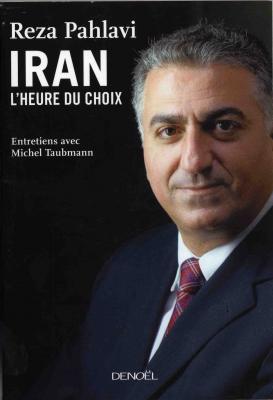 The Former Crown Prince of Iran is currently in France for the Promotion of his book of Interviews entitled “L’Heure Du Choix”. Here are various recent interviews given with the French and International Press which has made some constructive impact here in Europe.

Reza Pahlavi’s L’Heure Du Choix is available on amazon.fr in French ( an english translation should be out soon).Contrary to his other book Winds of Change, this book is actually a lengthy interview with French Journalist Michel Taubmann which is not just a blue print for change but also a direct oppurtunity to answer tough questions regarding his father’s reign and political and historical legacy. Many Readers may be surprised by the Former Crown Prince’s genuinely sincere answers often at odds with his staunch Royalist Constituencies. Nothing is left unanswered in regard to crucial and painful questions regarding Human Rights violations or his fathers responsability in his own downfall. But it is also a Book about National Reconciliation and commitment to Democratic and Human Rights Values. Up to the Readers to Decide on the pertinence or not of his arguments and chances.

Reza Pahlavi insists on his firm Opposition to Any Military Escalation in the region and considers quote: “An Attack on Iran would prove a Tragic Disaster and naive calculation that would only hurt the Iranian People and their Civil Rights Movement”. In Addition he calls for a moral support for Human Rights Activists like Mrs. Shirine Ebadi and particularly members of the Iranian Civil Society so as to help channel a Velvet Revolution. He believes that Time is Running and that if the world refuses to help the Iranian Civil Society on time and with stamina and determination, an Iran under the current leadership doted with a nuclear bomb will put an end to all hopes of seeing a Democratic Iran in a near future. Speaking of his intentions to create a branch of political coordination of the democratic opposition in France and Canada. He also reminds the Jewish People of its Historical Ties of Friendship with Iran since the ancient Times and Cyrus the Great of Persia who liberated them from Babylon. He also refered to his will to cooperate with ALL Democratic Opposition Parties be them secular republicans or Constitutional Monarchists, Left or Right Wing parties in order to find and define a common platform for concrete actions. He expresses doubts as to Khatami’s capability of bringing radical change  but expressed that he did not seek any type of revenge against Iran’s clerics if a Velvet Revolution was to bring them down. He believes in amnesty and the abolishing of capital punishment for all. Finally he expressed his commitment to the idea of a Referandum ( Only After the Fall of the Regime) to allow the ultimate choice of the Iranian People as to the nature of the future Secular and Democratic government. If the People choose a Republic instead of a Constitutional Monarchy he will not oppose it he will not accept the role of President if such a scenario becomes a reality but would applaud any given candidate for the job who would prove capable of assuming such a role with the approval of the majority of the people. If however the People choose a Constitutional Monarchy, his role will have to be defined clearly and in full transparency by the new drafted constitution. This would imply the creation of a constitutional assembly like the Supreme Court in America or the Constitutional Assembly in Great Britian which would guarantee the respect of the constitution and the seperation of powers ( Legislative and executive, Role of the Military etc …). The Q&A at the Cape France Conference below allowed journalists from the international press to ask questions as to his chances, support and also on the predicament of religious minorities in Iran including the Baha’is and Jews and finally the economic and geo strategic questions regarding the current nuclear crisis and his message to the Western Leaders ( And Obama Administration) as to how to deal with Iran. He insisted that he equally opposes Military Intervention and Sanctions against Iran both of which would hurt the people more than the regime. But he does call for the West to encourage Civil Dissobedience in Iran in the same way they did with their support for Khomeiny against his father’s regime.

Audio File ( Complete Conference with Q&A ) Copy and Paste link in your browser:

Audio File Here: ( Interesting cause RP say’s he does not believe that the Mullah’s intend to use an Atomic Bomb but enforce their geo strategic position in the middle east)