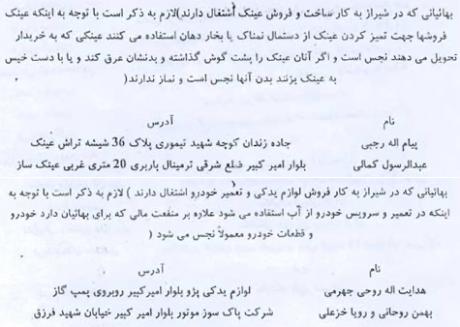 Trial of the Friends of Iran (یاران ایران) is set to begin this week and while many more Baha’is are now imprisoned for dubious and unsubstantiated charges, the regime in Iran is orchestrating the expansion of its attacks on two distinct fronts.

The first, is the very public and officially sanctioned imprisonment of members of the Baha’i community under trumped up national security charges for which they are not entitled to present a defense nor have legal representation.  Shirin Ebadi, who had agreed to represent the Baha’is in court, is now consumed defending herself against charges that have crippled her legal practice.

On another front, and concurrently, the government is disseminating the names of Baha’is, their professions and businesses along with the religious consequences of doing business with them or simply being in contact with them.  I received a copy of a 32 page document that contains  hundreds of names, home and business addresses, and a cautionary note that describes the consequences of contact with Baha’is as well as what needs to be done in response.

While the first tactic is sanitized for international scrutiny, the second feeds on the religious (in)sensibilities of the masses.  For example, they are fore-warned of the consequences of coming into contact with objects that have been touched by a Baha’i and how it can void their prayers(see sample images for two professions).  What the regime fails to do is to resolve the divergence between the two fronts of this one campaign.  On the one hand it speaks of the Baha’is as being a threat to national security and on the other hand it classifies them as infidels (kaafar) and unclean (نجس), both pejorative and religious terms.

As evidenced by prior instances of attacks initiated by the public, naming names after a concerted campaign of falsehoods can only lead to passions being inflamed and this defenseless group being physically in danger and their livelihood in jeopardy.

Alas, we can only hope that those that have not succumbed to the foul stench of the ideology that has consumed our society, are not few in numbers and have the determination to intervene and provide the protection that would be needed in the face of public assault on this community.

Let us not forget that while we in the West can only sign petitions, our brothers and sisters, have a responsibility to stand in the way of this tragedy and prevent its unfoldment.