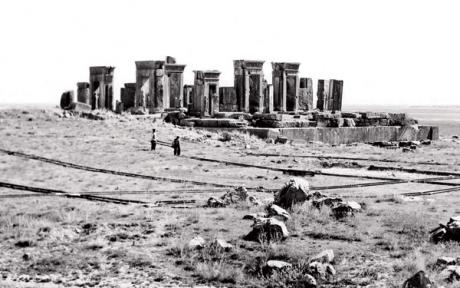 At a time of hope, when President Barack Obama has commended our heritage, saying “The Iranian people are a great people, and Persian civilization is a great civilization,” a court in Chicago is considering an attack on some of the most powerful symbols of this civilization.

Lawyers are attempting to seize and auction thousands of priceless artifacts from Takht-e-Jamshid. The Takht-e-Jamshid collection consists of over 10,000 clay tablets dating back to the Achaemenid Empire. Each tablet is a priceless treasure – a window into what was once the largest empire in the world. Under the careful eye of archaeologists from the University of Chicago, these tablets are providing a first-hand account of daily life in the Persian Empire 2,500 years ago.

For Matt Stolper, Professor of Assyriology at the Oriental Institute at the University of Chicago, each tablet is a priceless treasure — a window into Persepolis.

Yet, for several lawyers, the invaluable pieces of Persian and world heritage are worth nothing more than what they could fetch in a fire sale.

After collecting only a fraction of a $412 million default judgment against Iran, lawyers representing American victims of a 1997 Hamas suicide bombing in Jerusalem set their eyes on the Persian artifacts. Their goal: seize and auction our cultural items like cheap items on ebay.

There can be no doubt that all acts of terrorism must be condemned and punished, but targeting the cultural heritage of an entire people is not justice.

“Imagine if the Russians laid claim to the Declaration of Independence, the Constitution and the original draft of the Gettysburg Address because they had a legal case against us,” says Gil Stein, director of the Oriental Institute. “How would we feel?”

And this affront is not an isolated event, but rather represents yet another incident in a series of major cultural blows to Persian identity, heritage and pride, including the slanderous depiction of Persians in movies such as 300 and Not Without My Daughter.

This is not a political issue. This is a test of strength for our community. Are we, the Iranian-American community, capable of stepping up and taking action? Or are we going to let pieces of our heritage, identity and pride “end up on coffee tables around the country,” like one of the lawyers suggested?

By enlisting the help of a major law firm, NIAC has created an avenue to make your voice heard. Mayer Brown LLP, a top 10 international law firm, is submitting an amicus brief on behalf of NIAC and the Iranian-American community. But now it is in each of our hands to stop this affront to our rich Iranian heritage, because if we don’t, then who will?

We cannot afford to stand by silently as our culture is attacked. Under the Foreign Sovereign Immunities Act, the President has the authority to stop the seizure. Ask President Obama to intervene and prevent the symbols of our rich history and identity from being looted.