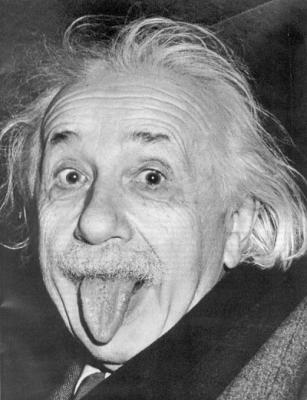 “Imagination is more important than knowledge.”

“Reality is merely an illusion, albeit a very persistent one.”

“The only real valuable thing is intuition.”

“A person starts to live when he can live outside himself.”

“I never think of the future. It comes soon enough.”

“Everything should be made as simple as possible, but not simpler.”

“We can’t solve problems by using the same kind of thinking we used when we created them.”

Two things are infinite: the universe and human stupidity; and I’m not sure about the the universe.”

“The most beautiful thing we can experience is the mysterious. It is the source of all true art and all science. He to whom this emotion is a stranger, who can no longer pause to wonder and stand rapt in awe, is as good as dead: his eyes are closed.”

“A man’s ethical behavior should be based effectually on sympathy, education, and social ties; no religious basis is necessary. Man would indeeded be in a poor way if he had to be restrained by fear of punishment and hope of reward after death.”

“He who joyfully marches to music rank and file, has already earned my contempt. He has been given a large brain by mistake, since for him the spinal cord would surely suffice. This disgrace to civilization should be done away with at once. Heroism at command, how violently I hate all this, how despicable and ignoble war is; I would rather be torn to shreds than be a part of so base an action. It is my conviction that killing under the cloak of war is nothing but an act of murder.”

“A human being is a part of a whole, called by us _universe_, a part limited in time and space. He experiences himself, his thoughts and feelings as something separated from the rest… a kind of optical delusion of his consciousness. This delusion is a kind of prison for us, restricting us to our personal desires and to affection for a few persons nearest to us. Our task must be to free ourselves from this prison by widening our circle of compassion to embrace all living creatures and the whole of nature in its beauty.”

PrevPreviousNetanyahu aide says Obama agrees on Iran, at least
Next30 years and how many more?Next