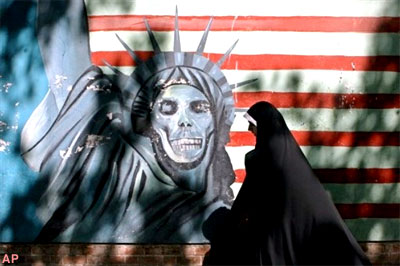 On February 1, 1979, Ayatollah Khomeini returned from exile to the cheers of millions of Iranians, ousting the pro-American Shah and instituting an Islamic Republic in what would later be known as the Islamic Revolution. To put it mildly, US-Iranian relations have been strained ever since, beginning with the 1979 hostage crisis in which over 50 US diplomats were held in Iran for over a year. Even today, there are no official diplomatic US relations with Iran (Mahbubani 207). Many of the policies instituted by the Islamic theocracy in Iran since 1979 are incompatible with the most basic and traditional American ideals – the separation of church and state, freedom of speech, and equality for all.

Support for secularism – the idea that government should be separate from religion – originated in the US because many of the very first American colonizers were fleeing state-sponsored religious persecution in Europe. As a result, there was fervent support of creating a “high wall between church and state,” as Thomas Jefferson wrote in a famous letter to the Danbury Baptists (Floyd 2). The ratification of the Bill of Rights in 1791 solidified the separation of church and state as a key concept in American society, with the very first amendment to our constitution forbidding Congress from making any law “respecting an establishment of religion, or prohibiting the free exercise thereof…” (Wise 185). While religion has always been a very important aspect of American society, it has never played an extremely large role in government.

In Iran, on the other hand, church and state are inextricably entwined. This is the definition of a theocracy – the church is the state. In Iran, the Supreme Leader must be an expert in Islamic jurisprudence and the “Assembly of Experts,” the elected body that chooses the Supreme Leader, is comprised completely of Mujtahids, or Islamic scholars (Dilip 61). Iran’s constitution even states that all laws are to be based on Islamic criteria (Maggi 129). If there exists a complete opposite to the American model with regards to the relationship between church and state, it exists in Iran.

Another right that has existed in American society ever since the ratification of the Bill of Rights is the freedom of speech – certainly one of American’s most guarded personal liberties. Again, in the very first amendment, Congress is forbidden from making any law “abridging the freedom of speech, or of the press” (Taylor 230). These rights are a staple of American society, in which the press is free to criticize the government to their heart’s content (and they do – just turn on the radio and listen to Rush Limbaugh!). The government does not control newspapers or censor material, protestors are allowed to assemble peacefully, and most everyone can say whatever they want to say, provided they don’t incite violence.

An entirely opposite system operates in Iran. In fact, Iran has its own ministry, the Ministry of Culture and Islamic Guidance, to decide what Iranian citizens are allowed to read and watch, banning books such as “The Da Vinci Code” and many Western websites, even NYTimes.com (Tait 1). As seen in the BBC documentary “Rageh Inside Iran”, all newspapers and magazines must have their articles approved before publication. There is no private television, only state-controlled television that consists of seven channels, and ownership of satellite dishes is illegal (Samii 1). With total power, the Iranian government is able to completely control the media in a manner that would make most Americans cringe. But it doesn’t stop there; even dress codes are enforced. Iran detained 150,000 people in its annual sweep against non-Islamic clothing in 2007 (MacFarquhar 1). Bloggers face threats and jail time for publishing ideas or images seen as threatening to the Islamic regime. Journalists could even face death, as in the case of Zahra Kazemi, a Candian-Iranian woman who was detained after attempting to take pictures of a controversial Iranian prison and died in prison of a head wound after reportedly being raped (CBC News 1). This clear absence of the freedom of speech is a direct result of a theocracy intent on keeping an iron grip on control. Naturally, the theocracy uses religion to justify its actions. Shaikh Fazlallah, one of the most influential clerics to oppose the Iranian Constitutional Revolution, took issue with the call for liberty during the early 20th century, especially the freedom of the press, arguing that it caused “sedition and permitted the spreading of calumny” (Martin 186). The current leaders of Iran use his example, and today he is celebrated in Iran as a martyr for defending Islam against democracy. In other words, thanks to government promotion of the choice interpretation of the Qur’an by certain conservative influential clerics like Fazlallah, there is no freedom of speech in Iran – Iranian citizens see what their government allows them to see. Regardless of the root of this reality, freedom of expression in Iran stands in stark contrast to the situation in the US.

Equality for all is an American value embedded in arguably one of the best-known phrases of any American political document: “We hold these truths to be self-evident, that all men are created equal…” (Jefferson 43). Penned in 1776 by Thomas Jefferson as the first line of the Declaration of Independence, this simple truth has been repeated throughout American history, by Abraham Lincoln in his famous Gettysburg Address and by Martin Luther King, Jr. in his equally famous “I Have a Dream” speech. Granted, American society hasn’t always allowed equality for all races and all genders, but in comparison to most other countries we are relatively egalitarian.

In contrast, the Iranian theocracy allows for major inequality between men and women and between Muslims and non-Muslims. Women especially face blatant discrimination under the law. In Iran, by law women inherit half of what men do from their parents, by law women do not have the right to seek divorce, and by law women need a male guardian’s permission to marry (Peters 72). Women who have been raped run the risk of being charged with adultery if they speak out but can’t prove it (Iran Focus). Perhaps most shocking is that the current minimum marriage age for girls under Iranian law is age 13 (an improvement, believe it or not, from age 9 in 1979), occasionally resulting in the marriages of extremely young girls to men much older (Keddie 116). Time Magazine reported in 2001 that the minimum marriage age has occasionally been exploited by child predators who marry poor young girls from rural areas, use them, and then abandon them (Spencer 187). Even still, this law has been strongly supported from the highest levels of Iranian leadership. In fact, Ayatollah Khomeini, the leader of the Islamic Revolution and a true icon in Iran, once intimated that a girl should have her first menstrual period in her husband’s house, not her father’s (Peters 72). Perhaps Khomeini had personal experience – he, at the age of twenty-eight, married a ten year old, and described marriage to a prepubescent girl as “a divine blessing” (Spencer 187). It is absolutely unfathomable to imagine Americans supporting such a leader. Clearly American views of women’s rights differ greatly from those propagated by the Islamic regime in Iran.

Additionally, under the Iranian theocracy there is inequality between Muslims and non-Muslims. Shaykh Fazlollah, the aforementioned admired conservative cleric, was completely against the notion of “equality of all subjects, regardless of their creed,” noting that such a law would allow the Zoroastrians to freely propagate their faith (Martin 186). Fazlollah preferred a system of law based on the “Divine Will, in which believers have a privileged position distinct from that of unbelievers,” based in his interpretation of Islamic law (Martin 186). Today, true to Fazlollah’s word, the Iranian government actively persecutes members of the Baha’i faith. Seven leading members of the Baha’i community in Iran were arrested last year and will soon stand trial under charges of spying for Israel, desecrating Islam, and campaigning against an Islamic Republic, although it seems clear that no real crime was committed (Moss 1). The persecution of peaceful followers of a minority religion is an act few Americans look positively upon considering our nation’s history.

Clearly the policies instituted by Iran’s Islamic theocracy stand against many American values we hold dear, from simple equality among citizens to freedom of speech and the separation of church and state. Additionally, considering that Iran seems to be pursuing nuclear technology, publicly supports Hezbollah, an internationally recognized terrorist organization, and that the current president, Mahmoud Ahmadinejad, periodically calls for “Israel to be wiped off the map,” it is no wonder that the US and Iran are constantly butting heads – we simply do not have compatible political ideologies (BBC News 1). Just as American democracy is incompatible with communism, it is similarly incompatible with the current Islamic theocracy in Iran. Without a similar base of state values, it is unlikely that the development of mutual respect necessary to improve US-Iranian relations will occur anytime in the near future.

Keddie, Nikki R. Women in the Middle East Past and Present. New York: Princeton UP, 2006.

Maggi, Michael. Review Of The Convention On Contracts For The International Sale Of Goods Cisg 2002-2003. New York: Kluwer Law International, 2004.

Taylor, Hannis. The Origin and Growth of the American Constitution. Houghton Mifflin company, 1911.