On Freedom of Conscience and Social Integration – A Baha’i Perspective 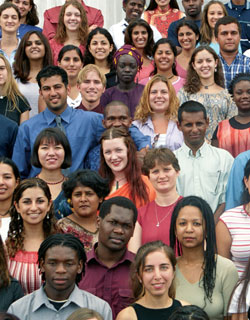 The blogs over the past several past weeks has resulted in a series of discussions that have primarily been instigated by points and counter points.   While it may have provided entertainment for some, it has been a source of frustration for many.

In response to those that have repeatedly asked for Baha’i perspectives on the recent material posted, we must begin with the foundation of the recent exchanges.  Baha’i resources are presented here so that the readership can independently make their own determinations in this public forum.

At a time when religious oppression, fanaticism and clashes between differing systems of belief are straining modes of governance, frameworks of development, security, and human rights—we are pleased that the Commission for Social Development has focused on the theme of social integration. This theme, so central to the challenges at every level of society, has been described as the capacity of people to live together with dignity and respect, as well as a process of fostering stable and just societies, in which individuals and communities are free to shape their present and their future.

To the extent that efforts towards social integration will reflect the diverse voices and aspirations of the world’s people, governments will need to tackle one of the most challenging and neglected issues of our time—ensuring every individual’s freedom of conscience, religion or belief.

The human being is not only an economic and social creature, but also a noble one with a free will and a conscience that make possible the search for meaning and for truth. Without the freedom to pursue this fundamentally human quest, neither dignity nor justice is possible.

Indeed, there are no grounds for thinking that freedom of conscience, religion or belief is a Western value or concern. Nor should this freedom be seen as a luxury to be pursued only after basic needs for food and shelter have been met. Rather, it is central to efforts to restore human dignity and strengthen community life.

…the concept of the “defamation of religions,” which has distorted the international human rights framework and challenged human rights machinery, has selectively restricted the space for peaceful public exploration and debate of belief-related issues, so desperately needed in diverse and divided communities. Furthermore, the related issue of religious extremism, as a major obstacle to social integration and stability, has yet to be acknowledged by the United Nations.

… the current debate about religion in the public sphere has largely been driven by proponents of extremes—those who impose their religious ideology by force and those who deny any place for expressions of faith or belief in the public sphere. Yet neither extreme represents the views of the majority of humankind.

The freedom of conscience, religion or belief may well be the next frontier in the march towards social integration. With every successive moral battle—whether focused on slavery, apartheid, racism, discrimination against women, or nationalism—humanity has broken down barriers to social integration and raised yet another pillar of a more just global community.

The individual’s freedom of conscience, religion and belief is at the core of social development and of efforts to create a just and harmonious society. As such, the collective task of moving towards increasing levels of integration will require the recognition of not only the economic and social dimensions but also the spiritual and moral dimensions of human life. Before one can connect with others, one must be free to think, to know, and to believe.

The above excerpts are from a statement made by The Bahá’í International Community.