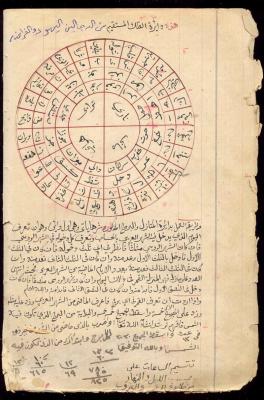 Moving from sectarian religious politics to a subject more dearer, many of my close friends know me as a practicing magus of the White Magic Tradition widespread amongst Sufis and occultists in the Islamic world known as Ruhaniya (lit. spirituality, but denoting white magic as opposed to black magic or sorcery, which is properly sihr). Currently this stream of praxis is concentrated almost exclusively within the Sufi Orders who transmit such knowledge to select students, usually the more advanced. Although there has been an explosion of publications and reprints of texts since the end of the last Lebanese civil war from Beirut, throughout much of the more traditional and fundamentalist enclaves in the Islamic world such practices are either frowned upon or outright persecuted. Iran currently seems to be the only exception to this rule, but in Sa’udi Arabia and throughout much of the Gulf kingdoms the practice of ruhaniya is outright proscribed by law and punishable in some cases even by death, esp. Sa’udi Arabia. This does not mean, however, that there aren’t presently any practicing ruhani maguses in this part of the world. It means that they are forced to practice in secret, dissimulate and do their Work largely underground.

The scope of the Ruhaniya Tradition pretty much encompasses every area of the Craft that is known in other occult traditions. In short this tradition can be classified as a form of practical Islamic Hermeticism. Yet much like the practical Kabbalah in Judaism – i.e. a tradition the Ruhaniya both interfaces with quite a bit and was influenced by – the central, proof-text of this tradition is the Qur’an. But it is a Qur’an that is liberated from crass literalism and so interpreted from a totally esoteric point of view; that is, a Qur’an that is taken as being a living, magical text or grimoire to be continually used. To put it another way, the Qur’an is to the Ruhani White Magician what the Tarot is to the Western occult tradition and its maguses, or what the Torah is to the Jewish Kabbalists. Talismans, amulets, charms and magic squares are all constructed to invoke specific formulas and energies culled directly from within the Qur’an. The Angels and the Jinn (the Islamic version of the Elementals of the Western tradition), i.e. the two species of subtle entities this tradition interacts with the most, are invoked and conjured using formulas originally derived from the Qur’an. It is for this reason, and others, why traditional religious establishments and the Islamists have a problem with this tradition. But, even with that, this has not stopped the general popularity of ruhaniya in many mainstream quarters of the Islamic world especially with the average populace seeking out and consulting such adept occultists wherever and whenever they can find them genuinely. Unfortunately, as in many such similar areas, the charlatans and pretenders are many here as well!

In Iran once one leaves the big cities there are genuine ruhani practitioners virtually everywhere in the rural parts of the country. Exorcisms of people possessed by jinn or demons is quite widespread as a regular event in rural Iran, and one point of view amongst many such Iranian maguses is that the root of all mental illness is to be found within some sort of entity possession – be it jinn or demon. Interestingly enough virtually every indigenous shaman in traditions as far-flung as those in Sibiera or the Amazon believe identically the same thing as well, using various herbs and transmitted formulas of their own to its remedy. In Iran, on the other hand, the one herb that is used regularly – whether in the form of incense or otherwise – for all purpose magical usage is the Esphand, or the Syrian Rue seed.  Its usage has long antiquity since it is one of the most sacred herbs in the Zoroastrian faith whose smoke continually fills prayer halls and homes alike.

I should also mention the name of the central figure of this tradition, the eleventh/twelfth century Tunisian master and occultist Shaykh Ahmad al-Buni, who is the author of one of the most prized but also most often banned and controversial books in the entire Islamic world, i.e.  Shams al-Ma’arif al-Kubra (the Great Sun of Gnoses). To be in possession of this book in the Kingdom of Sa’udi Arabia is punishable by imprisonment and even public flogging. To be caught practicing from it, is known in one instance to be punishable by death. I am presently in the process of translating this amazing Islamic occult encyclopedia in full from the original Arabic and have completed a draft of the first book (of four). The Persian equivalent to al-Buni and his tome is Husayn ‘Ali ibn al-Kashifi’s sixteenth century Asrar-i-Qasimi (Qasimi’s Secret) which deals with his classification of the occult sciences into 1) Kimiya (alchemy), 2) Limiya (talismanic magic), 3) Himiya (subjugation of souls), 4) Simiya (letter magic/producing visions) and 5) Rimiya (conjuration). Note that the first letters of the names of these five sciences when put together spell the Arabic phrase Kulluhu Sirr (all of it is a Mystery/Secret).

I leave my reader now pointing to a collection of my own writings and translations on the subject of this tradition, here, and a collection of the original language texts,  here.