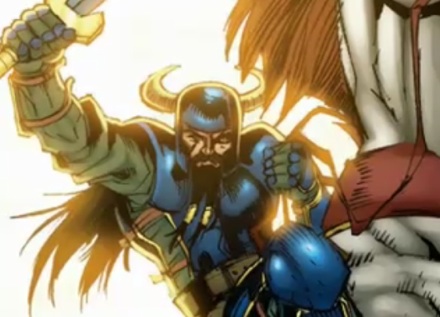 “Now, we have the Pahlevan, within our grasp, Rostam’s spirit is broken; his will to fight is gone. We must crush him. NOW!” –White Deev to Afrasiab

The Persian Epic the Shahnameh is filled with many great adventures, memorable colorful characters, imaginary landscapes and remote kingdoms all of which are encompassed in a rich and poetic verse that seems to remind every Iranian of their country’s Glorious Past, and of a Persian Identity forged by an eternal quest to overcome obstacles in the most virtuous way. An Identity that has been threatened throughout its history and not just by foreign forces … Probably one of the greatest lessons in the Shahnameh is when it warns us of the “enemy within”. One that resides in our own persona and nurtures a self destructive impulse when we lose self confidence, start lying to ourselves and thus break the old Zoroastrian Oath of “Pendar Neek, Goftareh Neek, va Kerdareh Neek” aka “Good Thoughts, Good Words and Good Deeds”. It is then when our soul becomes corrupt, our virtues dissolve into a potion of ignorance and True Pride is replaced by Arrogance. That is when even a Noble Knight of the virtuous kingdom can become the instrument of an evil empire in the hands of no other than the Devil Himself. The hero must react to vanquish his inner torment and fear or perish to oblivion … Thus seems to be the dilemma facing Iran’s greatest hero Rostam in Hyperwerks and its creative team’s adaptation of the third book: Rostam: Battle with the Deevs.

Filled with larger than life characters and creatures, to our delight this third adventure seems to have favored action to dialogue, while subtly, blending the hero’s inner turmoil with a fantasy world where dreams and nightmares coexist. After reading this third adventure, you won’t be surprised that Ferdowsi’s immortal story was to partly inspire both C.S. Lewis (Narnia Chronicles) and J.R.R Tolkien (Lord of the Rings) both of whom as members of The Inklings, an Oxford literary group, united by a love of literature and traditional values, greatly admired the Persian Poet’s Book of Kings and were inspired by Persian Pre-Islamic Mythology. A confirmation of this assessment was given recently by a publication of Collected Letters of C.S. Lewis Cambridge 1950- 1963 in which we learn about his endorsement of Zoroastrianism as “one of the finest of the Pagan religions,” and his eagerness to see more recognition for the Persian epic The Shahnameh. Ferdowsi’s Book of Kings told them important things about life—about who they were, what the world was like, and about the realm of the divine, rejoicing in their triumphant moments, weeping at tragic turns of events. Thus proving the universality of literature and its quest for immortal legends in the Empire of Dreams and Nightmares …

I had the pleasure of interviewing the team behind, (Bruce Bahmani, Cameron and Jamie Douraghy) the Rostam series for the release of this latest adventure.

Darius KADIVAR (DK): This new Adventure seems to deal with a much more darker theme than the two former ones and that is guilt. Rostam the hero is after all not so invincible, is he?

Team: This is exactly why we admire Ferdowsi’s work so much. He makes Rostam more human to his readers by revealing flaws and vulnerabilities. In this story, Rostam is only able to overcome his weakness once he hits rock bottom. After all, he is a hero and not a god.

DK: Your cover suggests a duality between Good and Evil, which is a recurrent and central theme in the Shahnameh. One also often sees this amongst costumed superheroes in the American comic book. We also get a MacGuffin explanation (which I will leave the readers to discover) to the Horns that will ornate Rostam’s helmet. Tell us why Rostam’s look and behavior changed in this story?

Team: The duality between good and evil is an important part of ancient Persian culture and is rooted in Zoroastrianism. So it’s only natural for this idea to be central in Ferdowsi’s Shahnameh. With regards to why we gave Rostam an evolved look, we wanted to bring him closer to what would usher in a clear break from his past. The same can be said for Raqsh! They are both reborn, in a way, through this evolution.

DK: You favored action over dialogue this time with spectacular battle scenes that keeps the crescendo going until the ultimate confrontation between Rostam and the White Deev. I couldn’t help seeing some indirect cinematic tribute to Frank Miller’s (The Armies of Turan and the Immortals) or even Spielberg’s Indiana Jones (escaping the boulder about to crush him). Was that intentional?

Team: We wanted Rostam to speak through action, as he had been in solitude with his tormented thoughts for so long, and it was time for him to erupt physically from this low point. There was no conscious cinematic tribute to anyone, we just wanted to show that the Deev controlled the world around Rostam, and what Rostam had to do to survive. But you are right in noticing the inevitable crossover between the world of comic books and movies!

DK: I particularly liked how you blend these action scenes with Rostam’s inner turmoil. We don’t know if his nightmares correspond to his real life challenges, like the episode of his fight with the dragon from the “Haft Khan Rostam” (one of the “Seven Trials from his youthful days) or when he sees his dead son Sohrab again in a Dream. I suppose the comic book format allows the inclusion of elements of his life and legend without having to tell the entire story? How did you weave these all together?

Team: Yes, the comic book format does allow us to include segments, without having to tell the whole story, and that’s the beauty of the medium we use. We have expanded and developed our adaptations along story lines that we find exciting. In this case, Haft Khan is one of those amazing stories that we have identified, and intend to feature at a later date.

DK: There are two extraordinary new characters, or rather creatures that appear in this episode. The White Deev (which exists in the original story) and the Red Deev, was he entirely created by the team? Tell us a little about them, their motivations, similarities and differences and what were Karl’s visual inspirations in drawing them?

Team: In keeping with our goal to make this ancient story current, we drew inspiration from both the past and the present. The White Deev’s visual references were drawn from Persian miniatures and their ancient depictions of him. He is, after all, Rostam’s ultimate nemesis, the master manipulator, and pure evil! On the other hand, the Red Deev was inspired by a more contemporary view of what the devil looks like today. The Red Deev is motivated by whatever the White Deev commands him to do.

DK: It seems to me that contrary to Celtic or Arthurian legends like in King Arthur where the illegitimate son Mordred kills the Father (actually both die in a final confrontation) in the Shahnameh it’s often the contrary. Be it Siavash or Sohrab they both are killed by their fathers albeit differently … Are we to see a recurrent Freudian (Or Rather Ferdowsian) symbolism here?

Team: Yes, this is a very astute observation, as it deals with a fundamental difference between eastern and western storytelling traditions. More often than not, in the West, youth triumphs over age, where as in the East, wisdom (which comes with age), typically overcomes youth.

DK: I can’t help but think that your comic book would make a splendid Motion Picture with either Old Fashioned Stop Motion Effects like those in Ray Harryhausen’s Films or an animated cartoon like what George Lucas did with the Star Wars Trilogies. Have you thought of contacting TV or Film companies who could show interest?

That would be the ultimate dream for our series. We have reached out to several entities, but most are not ready for this unique approach to a great story. Do you know anyone?

DK: What will the next Adventure be about and when will we get to see it?

Team: Next we tell the story of The Simorgh, Zal and Roudabeh. This story begins the birth of Zal and ends with how he and his young son Rostam, place the new king on his throne. This book will be out in early 2010.

DK: Once again truly congratulations to all three of you, as well as your creative and technical staff for this exciting new comic book.