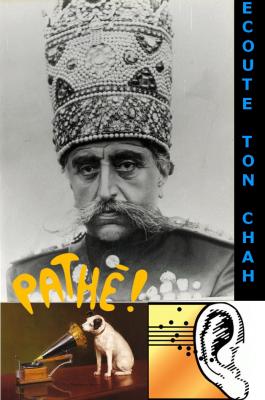 Listen to Mozaffar-ed-Din Shah congratulating his Prime Minister Atabak Azam and the Minister of Foreign Affairs(both of whom also thank his Majesty in the recoding). This is one of the rare existing audio records of the time that has survived to this day. Fascinated by Western Technology the Shah was also to bring back from a visit to Paris in the early 1900’s a movie camera and thus unknowingly trigger the early genesis of Iranian cinema to be.

Atabak Azam  was one of the most seasoned politicians of his period, he was an ally of the Russians in their struggle to dominate Persian politics. He was recalled from exile by Mohammad Ali Shah and asked to be his prime minister.

Previous to this post he held the post of prime-minister under Nasser-ed-Din Shah and Mozaffar-ed-Din Shah, Mohammad Ali Shah’s father and grand-father.

A staunch monarchist, opposed to certain factions of the constitutionalists, and especially opposed to British influence in Persia, he was assassinated on August 31, 1907, by a man by the name of Abbas Aqa of Tabriz, a “fidai” or religious warrior from Tabriz.