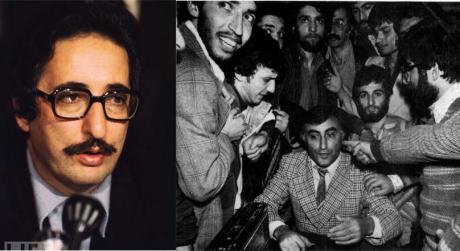 Former President of Iran Abolhasan Banisadre and War Correspondent and former political prisoner under the Islamic Republic, Fereidoune Sahebjam debate on French Channel 5 on the 10th anniversary of the Islamic Revolution hosted by journalist Jean Claude Bourret. (circa 1989)

Part of the Debate here:

Abol-hassan Banisadr  had participated in the anti-Shah student movement during the early 1960s, was imprisoned twice, and was wounded during an uprising in 1963. He then fled to France and joined the Iranian resistance group led by Ayatollah Ruhollah Khomeini. Banisadr returned to Iran together with Khomeini as the revolution was beginning in February 1979. He was the deputy economy and finance minister and acting foreign minister briefly during 1979, and the finance minister from 1979 to 1980. He studied Finance and Economics in France (BA and MBA).

He was elected to a four year term as President on January 25, 1980, receiving 78.9 percent of the vote in a competitive election against Ahmad Madani, Hassan Habibi, Sadegh Tabatabaee, Dariush Forouhar, Sadegh Ghotbzadeh, Kazem Sami, Mohammad Makri, Hassan Ghafourifard, and Hassan Ayat, and inaugurated on February 4. The Ayatollah Khomeini remained the Supreme Leader of Iran, with the constitutional authority to dismiss the President. The inaugural ceremonies were held at the hospital where Khomeini was recovering from a heart ailment. [2]

Banisadr was not an Islamic cleric. The Ayatollah had insisted that clerics should not run for positions in the government. In August and September, 1980, Banisadr survived two helicopter crashes near the Iranian border with Iraq.

Banisadr soon fell out with Ayatollah Khomeini. So, accusing Banisadr of a weak performance in leading Iranian troops in the Iran–Iraq War, Khomeini reclaimed the power of Commander-in-Chief on June 10, 1981 that he had delegated to Banisadr.

Banisadr was impeached on June 21, 1981 by the Majlis (the Iranian Parliament), allegedly because of his moves against the clerics in power[ , most specifically Mohammad Beheshti, the head of the judicial system at the time. Ayatollah Khomeini appears to have instigated the impeachment, which he signed the next day on June 22.

Fereidoune Sahebjam ( who died last year) was a respected War Correspondent and journalist in Iran and after that in France where he had published several books at the time on the condition of political prisoners in Iran under the Islamic Republic and also denounced the Sharia Laws including Stoning ( The Stoning of Soraya M. recently ) as well as  “Je N’ai Plus de Larmes pour pleurer” aka ” I have no more tears to cry” about the Children sent to War. He also was the first to report  about the predicament of the Baha’is in Iran.