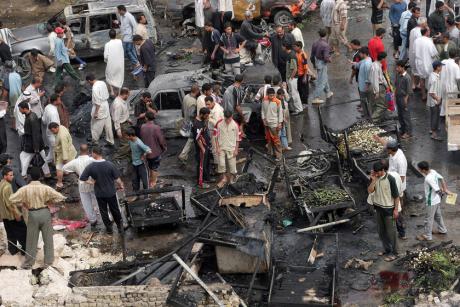 Number of dead: 75 from two bombings in late April. Over 150 dead and injured in the past year. Perhaps up to 500 casualties since the start of the war. At least 5 civilian Iranians still held by US forces in Iraq without charge.

Number of news stories on Iranian.com about this issue: Only one that I can find.

Degree of guilt associated with any of the victims: zero.

Number of laws any of the victims broke: zero.

Number of times US Media and Websites mentioned any of their names: zero.

Number of Iranian celebrities taking up this cause: zero.

Number of blogs on Iranian.com on this subject: none.

Number of times any victim was made “Iranian of the day”: zero.

Number of underage victims who were talented at art or poetry: unknown.

Number of total comments on any blog or news item on this issue: six.

Number of profane and bigoted comments NOT removed by site censors: two.

Number of people blaming the dead victims: three (see below).

Number of Iranian.com writers expressing public “outrage” at the lack of attention to the murders: two or three.

Number of writers making public requests to website publishers for more attention to this issue: none.

Number of requests to increase the front page coverage on this issue: none.

Number of people getting disgusted and saying they will leave the website because not enough attention was paid: none.

Number of International laws being violated: Too many. In addition to murders themselves, the Geneva Conventions specifically hold occupying powers responsible for security in occupied countries. The United States maintains 120,000 troops in Iraq is an occupying power in Iraq. Furthermore, specifically, the United States has not handed over what it calls “provincial control” in Baghdad and Diyala as it has in 12 other provinces.

Number of provinces where the April bombings occurred: two.

Number of those provinces under US security control: two.

Number of sunni militia fighters on the US payroll as part of the “surge” strategy last year: 84,000.

Number of Iranians calling for overthrow of the US Government based on violation of these (and MANY other) International laws: zero.

* Three messages not removed by site censors reprinted from this news item (emphasis mine):
http://iranian.com/main/news/2009/04/25/sixty-…

Hagheshoone arab doostahye koskesh
There are the one who keep IRI alive so I don’t give a f*k they rae dying.
If that is how we keep the IRI supporters number down I am all for that arab doosthaye, IRi supprterhaye madar jendeh

I as well as many others don’t give a damn about those Regime followers who are killed visiting so-called holly sights in Iraq. These are privilaged followers of regime who get their journey subsidized.

what a hell they were doing there in first place? well as hero of many of you Khalkhali said ” if they are innocnet they will go to heaven” so no problem, they must me be on their way to heaven now….