Roxana Saberi: Another Victim of the “Satanic Regime” in Iran 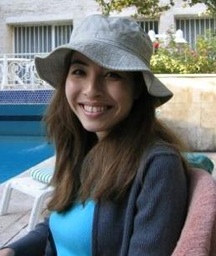 Roxana Saberi, the former Miss North Dakota, the recipient of the Miss America Scholar award, recipient of two masters degree (one in journalism from Northwestern University, and one in international relations from Cambridge University) is a talented American-Iranian journalist, who has worked for NPR, BBC, ABC, and Fox News. She is indeed a brave rising star in international journalism.

Saberi, who has been working and studying in Iran for last six years was arrested in January of this year and she is jailed in notorious Evin Prison, which is a torture chamber for thousands of prodemocracy and human rights activists,
, women, teachers, workers and religious minorities. Using torture, the Islamic Regime tries to break the prisoners’ resistance and get the forced confession for the Regime’s propaganda apparatus. . Also, Evin Prison has been, and, is still one of the mass killing grounds of the Clerical Regime with the satanic ideology! In summer of the 1988 alone, more than 10,000 political prisoners were massacred in a three-month period!

Initially, Saberi, was accused of buying and having wine in her car. Later she was charged with reporting as a journalist with an expired press card. Finally, without any evidence, she was charged with espionage in a closed door, and without the presence of a defense attorney! All of the arbitrariness and self-serving behaviors by the regime and its security agents are part of the “Satanic Regime’s characteristics! First, with regard to drug and alcohol, the Revolutionary Guard is the smuggling Mafia. The security agents make it a practice to plant illegal substances (e.g., drug, alcohol, porno-video or gun etc.) in the car or the house of prodemocracy activists, or, who ever they consider as a threat or whoever the regime wants to eliminate. Then, they search the property of their target and charge the person with possession of illegal substances, which they themselves planted in the possession of the victim! The regime tries to discredit the individual or the group by defamation of character. This is a common and well known practice by the regime.

Saberi has never conducted any interview with anyone in Iran after the expiration of her press card. Roxana may have been interviewed by some news agencies as an informed journalist and may have expressed her own opinion. This is not tantamount to practicing journalism with an expired press card.

In the last thirty years, the regime, in order to maintain her grips on power and expand her “Satanic Ideology” has accused, without any exception, many intellectuals of espionage for US and Israel. The regime has arrested several Iranian-Americans in the past few years accusing them of attempts to overthrow the regime through “velvet revolution” or espionage! Thus, Saberi’s accusation of espionage is just an example of the Satanic Rulers’ tactic to scare the public and maintain their grip on the prodemocracy groups in Iran.

In July 2003, Zahra Kazemi, the Iranian-Canadian photo journalist was murdered by the Public Prosecutor of Tehran and his associates, while in detention in Evin Prison!

According to the Human Rights Watch report, the Islamic regime judiciary is the center of the human rights violations and a small group of judges accountable to the Supreme Leader has shut down public dissent through torture, indefinite solitary confinement and denial of basic due process rights to all political prisoners. This report indicates that “The authorities have largely succeeded in their campaign to send a message to the broader public that the costs of voicing peaceful political criticism are unbearably high”. As it is noticed, the regime’s judiciary system is part of the repression apparatus rather than protecting the rights of citizens!

According to United Nations report, “the climate of fear induced by the systematic repression of people expressing critical views against the authorized political and religious doctrine and the functioning of the institutions coupled with the severe and disproportionate sentences imposed lead to self-censorship on the part of many journalists, intellectuals, politicians, students and the population at large, thus in effect impeding freedom of expression”.

The espionage charge against Roxanna Saberi is baseless and sham but the motive behind it is real, and is in accord with the regime’s “Satanic Rule”. There is an Islamic rule called “Taqyyah”, which means, no matter how evil and satanic the motive is, whatever you do to advance the cause of Islam is acceptable! Now they have taken Saberi, a high profile journalist, hostage! The motive may be to pressure the Obama Administration, to get the release of three members of the regime’s Revolutionary Guard jailed in Iraq. Or, it may be motivated by internal factional politics for the June sham election, or in response to President Obama’s recent overtures to the regime. Ahmadinejad’s faction and Revolutionary Guard feel they become marginalized through dialog and possible reconciliation with the US. The Ahmadinejad’s racist statements about Israel on Monday April 20, 2009, at Geneva anti-racism meeting, reinforces this motive. Clearly, Roxana, as a high profile American-Iranian journalist, seems to be a case to reinforce their motives. Yes, Roxana is therefore another victim of the regime with “Satanic Ideology”.

The irony is, knowing the Islamic regime and its officials with the gross and systematic violations of the human rights on record, yet the UN provided a platform for Mahmoud Ahmadinejad; one of the hostage takers of American diplomats in US Embassy in Tehran, in 1979, an executioner, a racist, an Anti-Semitic and Holocaust denier, to talk about racism! It’s all a farce!

According to International Federation for Human Rights, Islamic regime is ranked 160th. Out of 166 countries in term of freedom of expression. In 2008 alone, Iran had the highest per capita execution in the World, among them were seven children! The sources of this information include the Annual reports of Amnesty International, Human Rights Watch, UN Commission on Human rights, State Department’s and other organizations that report on human rights in Iran. All the sources indicate that continued gross violations of human rights including public hanging, stoning, eyes gouging, amputation of arms and legs, just to name a few, is a common practice within the regimes’ judicial system! Given these facts, that Ahmadinejad was given a platform in Ati-Racism Conference remains understandable.

The regime’s representatives must be banned from participating in any conference on human rights and be expelled from UN and all other international agencies, as long as they are violating the human rights of the people. I don’t believe it is that difficult to understand the fact that the regime, which has no respect what so ever for its people, does not care about others?

The Islamic Regime was the first government established with the Islamic ideology in the region in 1979, and since then, Islamic extremism and terrorism have increased. The regime has tried to expand its influence in other Moslem countries, especially supporting the Islamic extremist groups in regional conflicts

Therefore, to promote human rights and democracy and fight international terrorism, the policies of the democratic governments, the United Nations, and international human rights organizations toward the Islamic regime are very important. These governments and institutions should provide the moral and political support for prodemocracy movement in Iran. This can be achieved by demanding the respect for human rights, in any possible meeting and negotiation with the regime.

Therefore, the role of the Iranians in the Diaspora, particularly the Iranian-Americans NGOs, should be to lobby western and US governments and politicians to pressure the Islamic regime to respect human rights and liberty of individuals in the country. The urgent issue is not just to be lobbying to promote the interest of major corporations and the “Satanic Regime”! The improvement of human rights conditions in Iran, supplemented with the moral and political support by the Western democratic governments can unravel the Islamic regime’s hold on power. An empirical study of 150 countries shows that ensuring human rights, civil liberties and freedom of press significantly reduces the chance of dictatorial regime’s survival

Therefore, the United States, Western democracies and all international organizations in their dealing with the Islamic regime in Iran, should pressure the regime to respect human rights, and at the same time should lend their moral and political support to the Iranian people in their struggle for liberty and justice. A democratic and secular system of government in Iran has broad positive political impact in the region, and for the fight and defeat of international terrorism. Lets hope that Saberi along with all other political prisoners, who are not high profiles, obtain their liberty with the wise policy of all freedom loving people and institutions through head-on confrontation with and demand on the “Satanic Regime” in Iran.