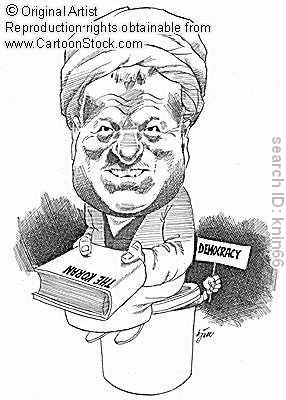 This letter was written by the Iranian cleric Hadi Maasoumi in May 2005, Michael Ledeen posted it on The Corner, the primary source on Iran-Khabar can´t be retrieved anymore.

The letter to Rafsanjani is written by the Karaj based cleric Hadi Maasoumi. He says in the letter that he is ill and near death, so presumably that is what has given him the extra ordinary courage needed to write this letter.

If this letter was from an exiled opposition, it would not have been so controversial but to read this sort of thing from a Shiite cleric is truly remarkable.

In the letter, the cleric Hadi Maasoumi starts from the beginning of Islam in Iran. How the religion was forced upon Iranians, how the invading Arabs raped the Iranian women, massacred the population, looted our wealth, tried to run the windmills with the blood of Iranians and how they burned all our books and destroyed so much of our knowledge.

He then starts scrutinising 26 years of Rafsanjani’s relentless power. He reminds Rafsanjani of what went on in Iran’s political prisons in the 80s. How young virgin girls were raped before their executions using Koranic justifications – virgin girls go to heaven no matter what, so young female political activists were raped to ensure they didn’t go to heaven – how thousands suffered torture and the massacre of Iranian political prisoners in 1988.

The many extra-judicial killings of Iranian dissidents both inside Iran and outside Iran. “Ayatollah Rafsnajani, you know how murder, kidnapping and torture has become synonymous with your name” Maasoumi writes in his letter.

Hadi Maasoumi asks about Rafsanjani’s close relationship with the likes of Saeed Emami, responsible for murder of dissidents inside Iran and Vahid Gorji who is responsible for many assassinations of Iranian exiles outside Iran.

Maasoumi recalls how Rafsanjani unnecassarily prolonged the war with Iraq, casuing the death and injuries to millions and how he himself hugely profitted from the war instead.

Maasoumi asks Rafsanjani to comment on the imprisonment of many of Iran’s dissidents today. What he thinks of stoning, public flogging, cutting limbs and forcing women to wear the veil.

He asks Rafsanjani why women in Iran are forced to wear the veil in summer heat and yet Rafsanjani’s daughter Faezeh dresses up in skimpy clothing when she travels through European cities of Paris, London and Geneva.

Even perhaps all this is not that controversial, there are after all many Iranian clerics who oppose the Islamic Republic and the rule of mullahs. But just read this below. This is an exact translation of one paragraph of an elderly Shiite cleric’s statement on his death bed:

You know like I do what lies behind this religion (Islam), after all this crime carried out against Iranians. lets do one good thing and tell the people what is behind this religion. Lets tell everyonel that this religion is neither “martyr generating”, nor pro-science nor pro the people, this religion tells the elite that it is for the plebs and it tells the plebs that it is for the elite, it tells the elite that all its silly laws are for the stupid plebs, in fact this religion is “ignorance generator”. It has come about to humiliate people. As you (Rafsanjani) once told me, it is one religion for the elite and another for the plebs. You rightly regard yourself, the supreme leader and your Guardian Council as the elite, and the “martyr generating” nation of Iran are the plebs. Now for the sake of God tell the truth to the people that there is nothing in this religion but stupidity and ignorance, other than silly laws about what is considered clean and what is untouchable, what is allowed and what is not allowed, believe me that God and the people will then forgive you, although I know you are conscious enough NOT to believe in God!