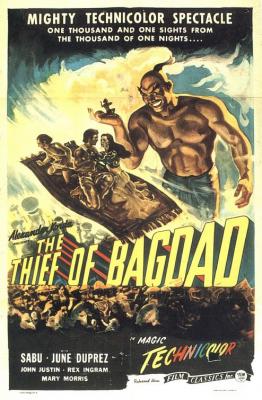 Prince Ahmad is the rightful King of Bagdad but he has been blinded and cast out as a beggar. Now a captive of the wicked Grand Vizier Jaffar he is cast into a dungeon where he meets Abu, the best thief in all Bagdad. Together they escape and set about a series of adventures that involve a Djinni in a bottle, a mechanical flying horse, an all-seeing magic jewel, a flying carpet and a beautiful princess. A Gem of Technicolour and early Film Era Special Effects, Alexander Korda’s The Thief of Bagdad brings all the Magic of the Thousand and One Nights Tale to Screen in this 1940’s classic.

Available on DVD at Amazon.com

In ancient Bagdad, the young prince Ahmad (John Justin) is betrayed, deposed, and imprisoned by his vizier Jaffar (Conrad Veidt), an evil and calculating man who is also a master of the Black Arts. But Ahmad is saved from prison, and certain execution, by Abu (Sabu), a young thief who has made his way in life by stealing whatever he needs. Together they escape from Bagdad and make their way to the port city of Basra, where they hope to sign to sail with the renowned sailor Sinbad. But Ahmad chances to catch a glimpse of the daughter (June Duprez) of the Sultan (Miles Malleson, who also co-wrote the screenplay), and falls hopelessly in love with her. Sneaking into the garden where she spends most of her days, she meets him and the two are bound together forever in that moment, he the first man she has ever seen, and she the most beautiful woman he has ever beheld. But no sooner have they declared their love for each other then Jaffar arrives in Basra, seeking the princess’ hand in marriage — and to secure the blessing of her father, a fanatical collector of toys, he offers the aging Sultan a fantastic mechanical flying horse that bears him into the clouds at will. The sultan agrees to the marriage, but the princess flees the city. Abu and Ahmad are captured and before either can tell the sultan of their plight, Jaffar works his magic, leaving Ahmad blind and transforming Abu into a dog — conditions that will remain until he holds the princess in his arms.