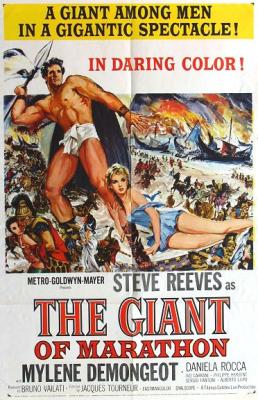 La battaglia di Maratona aka The Giant of Marathon directed by Jacques Tourneur is a Sword and Sandals movie that tells the fictitious story of Philippides the Greek Olympic Champ Hunkly portrayed by Steve Reeves who single handedly virtually defeats the Persian Army of King Darius the Great. Watch Online Below.

This classical peplum tells a fictitious story set in 490 BC, the time of the Medic Wars during which Persian armies sweep the Ancient world. Having brought home to Athens the Olympic victor’s laurel crown, Philippides joins as commander the Sacred Guard, which is expected to defend the city-state’s liberty, a year after the chasing of the tyrant Hippias. Athenian supporters of Hippias conspire, hoping to side Philippides by marriage to Theocrites’ expensive servant Charis, and thus neutralize the guard. She fails to seduce him, as his heart is already taken by a young girl before the learns her name is Andromeda, daughter of Creuso. Everything personal is likely to be put on hold when the news breaks that the Persian King of kings Darius’s vast army is marching on Greece, hoping its internal division will make its conquest a walk-over. Theocrites reproaches Miltiades to hold back the sacred guard to defend the Pallas temple after a likely defeat, and proposes instead to negotiate terms with Darius, but is told an alliance with Sparta could save the Hellenic nation. Philippides makes the journey and survives a fiendish attempt on his life by conspirators; he returns with Sparta’s engagement during the Persian attack in far greater numbers on Militiades valiant troops. Charis, left for dead after overhearing Darius’s orders, reaches the camp to tell that the Persian fleet, now commanded by traitor Theocrites, is heading for Piraeus to take Athens. Miltiades sends Philippides ahead to hold out with the sacred guard until his hopefully victorious troops arrive, and after his perilous journey back they do a great job, proving superior athletes can do better then traditional naval ramming tactics … see Full cast

PrevPreviousThe Garden of Love’s delight
NextWho Will Stand Up to America and Israel?Next