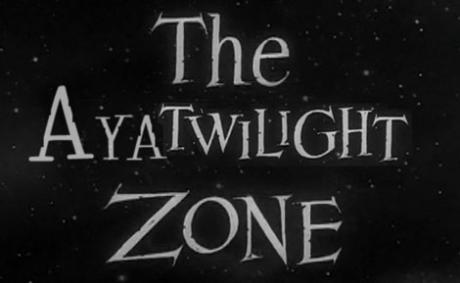 So, once again, we find our hapless Trio, off they go, down the well trodden path…

Soosan 43 (Susie to her friends), Sassan 23 (Sossy Mankan to his friends), and Gholam 53 (the mighty warrior), chock full of sweet tea, gheymeh and a larger than usual dose of naivete, will once again make their plucky quattro-annual way from their homes, pre-destined to meet at a pre-determined time and place, namely June 12th, at the official Government Voting Station (#23?) somewhere in the dark and damp labyrinth of the Tajreesh Bazaar.

Soosan thinks this is the one. Although a bit more conservative than in 2005. Her candidate, is pragmatically moderate to suit her slowly shifting idea of what a “Good” Iranian president ought to be.

Sassan is ready to get down and party. The past administration has been a real downer, and he is hoping that after this election, he can finally get himself a nice piece of “moderation”.

Gholam has had it with everything. He is sick and tired of the lack of resolve of the previous President. Felt that Iran wasn’t hard enough on the Iranian press, Israel and the US. A hardliner through and through, Gholam is angry that you can’t even get good Ashoora chains anymore. So this time, no more discussion, he’s going for the full monty and supporting the conservative prison guard turned politician. If you want anything oppressive done right, you’ve got to get off your butt and do it yourself.

Overseas, Mehdi (51) and Mani-Joon (48) a cute childless couple who live in Brentwood, get ready for their Sunday varzesh. They boycott Starbucks because of the CEO’s support for Israel, so they walk together on Sundays to Peets instead. Sure it’s farther, and the mochas at Peets truly suck, but that’s the whole point of standing for principle. They have never been so cute or optimistic than in this election. Now is the time! Mehdi is so up, that after one of his bi-monthly visits to Tehran to keep an eye on his dear departed Father’s apartment building and collect the rent, he even registered to vote absentee. The folks at the Iranian Consulate in the Pakistan embassy in DC are so polite and helpful!

In Paris, Dr. Termi-Zadeh, technically a bona fide ex- Ghajar prince, now a retired professor of engineering from Toulouse Technical College De Mon Amour, pores over a reasonably priced dark yet bold and fruity red with hints of blackberry and an earthy fresh poured cement nose, along with the latest downloaded copy of the revised 1989 Iranian Constitution and mutters to himself over and over, “Mais c’est impossible!”

Each has a semi-processed thought, and each has developed a notion, and each has the genuine hope of how Iran will be somehow made better after this election.

But there is a fifth dimension to an Iranian election. “It is a dimension as vast as space and as timeless as infinity. It is the middle ground between light and shadow, between science and superstition, and it lies between the pit of man’s fears and the summit of his knowledge.” This is the dimension of Ayatollization. It is an area which we call the Ayatwilight Zone.