pictory: Ami Abbas Hoveida and wife in their Home Garden (1974) 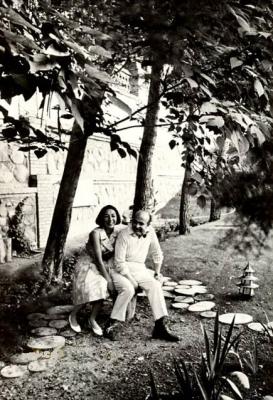 Prime Minister Amir Abbas Hoveida and wife relax in their home garden. (circa 1974)

Born in Tehran to Habibollah Hoveida (Ayn al-Molk), a seasoned diplomat most prominent during the latter years of the Qajar dynasty, and Afsar al-Moluk, a descendent of the very royal family the senior Hoveida would serve for much of his adult life. Because of the responsibilities borne by diplomats such as Ayn al-Molk, the Hoveida family was never fixed in one residence for any prolonged length of time. This nomadic existence is clearly evident in Amir Abbas’ education. Studying in various countries gave Hoveida a unique cosmopolitan flair that would remain being his most enduring characteristic. During the family’s stay in Beirut, Lebanon, Hoveida attended Lycée Français, an institution affiliated with the French government. His love for France and its culture are rooted in his tutelage at the lycee. French literary works by the likes of André Gide, André Malraux, Molière, and Baudelaire, captivated the young Hoveida and gave way for his intellectual growth. Some pundits suggest that it was Hoveida’s intellectual prowess which initially attracted him into the shah’s folds. More Here

The Persian Sphinx: Amir Abbas Hoveyda and the Riddle of the Iranian Revolution by Abbas Milani