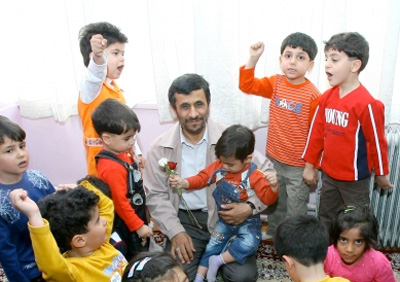 The word tragedy, derived from the ancient Greek words for goat (tragos) and song (aedien), invokes the creature’s plaintive cries.  The cacophony of confused voices – on the streets, in the media and in campaign debates and jingles – surrounding Iran’s upcoming Presidential elections bring to mind the term’s origins.  Iran’s post revolutionary regime, described by such paradoxical terms as “theocratic democracy” and “dual government” is the cause of the Iranian voters’ vows.

The country’s electoral process, while working well in the middle, featuring hard-fought contests and hard-won votes, is rigged on both ends: candidates have to be vetted by unelected bodies before they can run for office and, once elected, they are kept from setting defense and foreign policy, privileges allotted to the unelected office of the “supreme leader.”

One wonders why Iranians would bother to vote in a system in which the dice are so flagrantly loaded against democratic choice.  Many Iranians, wondering the same thing, stayed home in great numbers during the last election season.  Then they had to stand by and watch Mahmoud Ahmadinejad triumphantly walk into the presidential palace.  Now clamoring for “anybody but Ahmadinejad” they are driven back into the fold of the same flawed system that encourages voting but yields little beyond the ability to avoid the worst alternatives.

The systemic restrictions on the emergence of genuine electoral choices have turned the Iranian elections into a recycling, rather than a circulation, of elites. In a country in which more than half (%50.3) of the population is under the age of 25, the average age of the four Presidential candidates, all high officials from the previous governments, is 60.5.  Nevertheless, the June 12th election offers real alternatives ranging from unsavory to unbearable.

On the conservative side, President Ahmadinejad, the astute populist who blindsided and defeated his seasoned rivals in the previous election, continues to stay in the public eye, thanks to his instinct for rabble rousing.  In a recent display of his demagogic skills he added another catastrophe to the list of the historical calamities he denies: The United States, he asserted, alleges great loss of human lives during the 9/11 attacks but it has never published the list of the casualties.  Such conspiratorial absurdities, while angering the informed and educated Iranians, earn him support on the street.

The president’s conservative rival, Mohsen Reza’i’s sole claim to fame is his leadership of the “Revolutionary Guards” corps during the Iran-Iraq war (1980-1988) that expanded a legitimate two- year defensive war into an inglorious eight-year fratricide.    Had he been running for office in another country, perhaps he could have touted his business acumen in retirement that includes, among other things, a chain of fast food joints.  But in Iran leaders are expected to display conspicuous austerity: eating simple meals, driving beat-up cars, and sporting dull wardrobes.  Reza’i’s fortress-palace in the vicinity of Tehran is not likely to win him votes.

On the opposition side, the dispirited and divided reform movement has failed to nominate a robust candidate who could survive the vetting process and has instead thrown its support behind two candidates.  The more prominent one, Mir Hossein Mousavi, an architect by trade, is a former Prime Minister (1981-1989) who has never been associated with the reform movement and doesn’t even pretend to represent the reform platform.  He simply accepts its endorsement.  He remained silent, almost forgotten, during the tumultuous reform period (1997-2005) reading and painting in his self- imposed seclusion in Tehran.

The resurgent Mousavi’s selling point is that he is, now, the same honest manager he was two decades ago.  No wonder his campaign relies so heavily on the element of nostalgia.  The fact that he has not defended or revised his statist economic policies and diplomatic failures during the dismal war years has rendered his criticism of Ahmadinejad’s rule susceptible to rebuttals.

The other reform candidate, Mehdi Karroubi, the former Speaker of the parliament (2000-2004) is distinguished by the courage he displayed in visiting the political prisoners and their families during his tenure as the Speaker.  Even now, he is the only candidate who dares to hint at the necessity of revising Iran’s constitution: the regime’s Achilles’ heel and the root cause of Iran’s political malaise.  However, Karroubi also stood by as his reform-dominated parliament, trying to usher in meaningful change in civil liberties, was stymied by the clerical establishment in the notorious case of the “Revision of the Media Act”.  Thus Karroubi – his episodic bravery and candor notwithstanding – is at least partly responsible for the failure of the reform movement.

The choice on June 12th, however, while unpalatable, will be consequential for a modicum of prosperity and security for Iran during the next decade.    It is a sign of these chaotic times that Iranian secular and reform intellectuals exchange barbs over the relative virtues of Mousavi versus Karroubi. Recently the foremost Iranian novelist, Mahmoud Dolatabadi, gave a rambling speech in a pro-Mousavi rally, chiding the foremost Iranian reform political philosopher, Abdolkarim Soroush for his support of Karroubi.  Soroush responded with a caustic reprove.

Mahmoud Sadri is Professor of Sociology at Texas Women’s University.