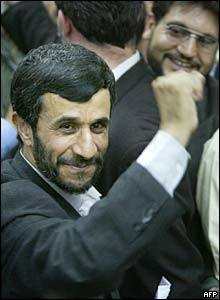 Well, well, well! Now President Ahmadinejad can claim to speak with the voice of the people – a mandate granted to him by the nation. The elections in Iran are over. What a relief! But not on Iraniandotcom. We are now back to the same old and enjoyable territory wherein we feel most comfortable: conspiracy theories. For weeks if not for months to come, pundits on Iraniandotcom, and there are multitudes of them, are going to debate the results and accuse the other side of, among other things, foul play. It is easy now to say: Well I told you, didn’t I? But I am not going to
tell you this. It is always too easy to be a smart ass after the event. The events will now speak for themselves.

With all the excitement and pretentions to a new democractic rise in Iran to reject the hardliners and embrace the reform, now President Ahmadinejad can claim massive poplular support for his plans and policies. If he is to stay true to his claims in his TV debates, that the reform candidates and their chief supporters are corrput to the core, he must now put his words where his mouth is and prosecute them. Similarly, if the three defeated candidates truely believe that they were cheated, they should not remain silent and accept the defeat with dignity. If neither of these happen then I would like to see the faces of those who claimed voting can make a difference!! After all a new revolution may be in the offing :o))

But back to Iraniandotcom, its unreal world of its own, and its army of “experts”. For now, I am going to sit back, watch and enjoy the fight with glee. You know what is the funniest accusation I have been hearing since yesterday:  irregularity!!!