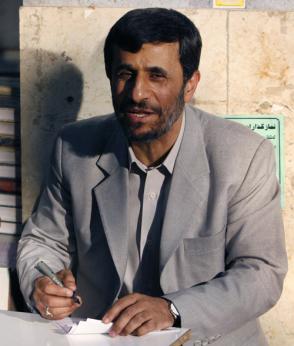 I hate to say “I told you so…” but considering the election results and my uncanny prediction of the outcome on may 20 in the blog ‘a privilege long forgotten,’ I feel compelled to re-post a portion of my comment under what I had posted under the title ‘early results are in…’:

“lastly, i don’t think that even those who vote are idiots (although, i consider myself an idiot for voting in 2001). they must have an agenda or a perception that the act of voting satisfies it. but you, sir or madam [referring to the author of the blog], obviously have no shame. the iri infiltrates these sites and urges people to vote against ahmadinejad and creates an environment in iran to do just the opposite (rahbar implicitly and explicitly supporting him, closing of newspapers, etc.). the outcome of the election is already determined: ahmadinejad 63%, mousavi 29%, the other two stooges 5%, and 3% invalid votes.”

One must first come to terms with whether one believes that the votes were actually counted and there was not widespread fraud. I will describe three possible scenarios on the validity of the votes (and welcome other scenarios by the readers):

Scenario 1: If one believes that there was widespread fraud and the outcome was pre-determined (the shadow government being complicit), then the pro-vote stance becomes irrelevant and one can claim that the campaign of the pro-voters (knowingly or unkonwingly) was all a ruse to increase voter turnout as it would “serve as a slap in the face of the west” as Khamenei and his agents have repeated before, during and after the elections.

Scenario 2: If the votes were actually counted give or take some irregularities, one must respect the wishes of the people no matter how much one disagrees with them. In even the most idealistic democracy (i’m not insinuating that there is a democracy in Iran), there are always losers and winners.

Scenario 3: One can also surmise that the votes were supposed to be counted legitimately but were hijacked by the Ahmadinejad administration. In this case, one has to question how Ahmadinejad, who cast himself as an outsider to the powerbrokers such as Rafsanjani and Khatami, and when an omnipotent shadow government led by Khamenei is in power, Ahmadinejad’s administration can pull off such a heist without harm.

The purpose of this blog is not to ‘rub it in’ but to generate discussion on the reasons that the pro-voters invoked and see if they’re still valid in light of the results. As an example of pro-vote argument, “if one doesn’t vote against ahmadinejad, they’re inviting a military attack against iran.” Alternatively, the reason for not voting, or the effect the non-voters had on the election. In addition, this blog is intended to get a sense of what the readers believe a path should be for a more palatable outcome of Iranians (if it’s not, in one’s opinion, already achieved).

I am a believer of either Scenario 1 or 2 and here’s my terse reasoning for not voting under each of these scenarios. Under Scenario 1, it is obvious that I would just be wasting my time to vote; there’s a cost associated with voting (e.g. taking time to go to a voting booth), and no benefit in having my voice heard. Under Scenario 2, I believe that I have to have faith that voting is a consequence of a democratic process; I don’t believe in a convoluted system where the candidates are selected by a clandestine process and the label ‘reform’ is arbitrarily placed on a candidate with no track record for reform. Therefore, I will not participate in voting in a system not remotely resembling a democracy, and one cannot readily discern a significant difference between the candidaes.