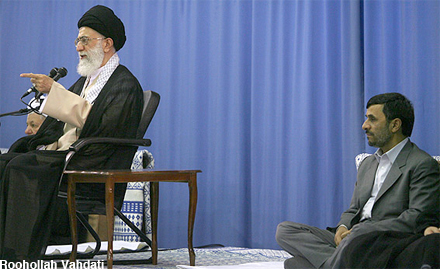 Large-scale manipulation of Friday’s presidential election in Iran was to be expected, but few could have predicted that Iran’s supreme leader, Ayatollah Ali Khamenei, had a military coup in mind. By declaring incumbent Mahmoud Ahmadinejad the winner, Khamenei conveyed a clear message to the West: Iran is digging in on its nuclear program, its support to Lebanese Hezbollah and Palestinian Hamas, and its defiant regional policies.

In the streets of Tehran and other major cities, riot police, members of the Islamic Revolutionary Guard Corps and Basij militias are battling reformist demonstrators who are protesting the results. The government has cut Internet connections and cellphone service and jammed foreign satellite TV and radio broadcasts. Most foreign journalists in Iran to cover the election were expelled after the voting ended. More than 100 leaders of the reform movement have been detained so far, and others are under what amounts to house arrest.

Even though Khamenei asked the candidates not to dispute the results, a reformist group called the Council of Militant Clerics, led by former president Mohammad Khatami, apologized to the people for not being able to protect their votes and asked the government to overturn this result and hold new elections. In statements Sunday, two of the presidential candidates, Mir Hossein Mousavi and Mehdi Karroubi, asked people to continue their “nonviolent demonstration” throughout the country and criticized the government for using violence against demonstrators.

More than 80 percent of Iranian voters turned out primarily because Ahmadinejad’s three challengers succeeded in mobilizing Iran’s silent majority, especially in the two weeks before the election. All three warned explicitly about the risks of Ahmadinejad’s domestic and foreign policies. Although Ahmadinejad enjoys the support of Iran’s powerful supreme leader, in the final two weeks before the election all reputable polls inside and outside of Iran showed that Ahmadinejad’s popularity had decreased significantly — particularly following televised campaign debates — even in rural areas and among the urban working class.

Ahmadinejad took office four years ago through an engineered election. This time Khamenei announced — before the official Interior Ministry count had been issued — that Ahmadinejad had won more than 24 million votes, surpassing even the record set by Khatami 12 years ago.

Mousavi and Karroubi have called the announced results “ridiculous.” Mousavi said Sunday that invalidating the election is now the only way to restore the people’s trust. The Iranian supreme leader’s post-election statement, in which he described a “people’s epic” through a “completely fair and free election,” did not prevent shocked followers of reformist candidates from rioting over the weekend to chants of “down with the dictator.”

The challengers also asked people to go to the roof of their homes and shout “Allah is great,” a slogan that reminds people of the 1979 revolution. Mousavi has invited protesters to gather this afternoon on Enghelab Square in Tehran; gatherings are expected in more than 20 other cities.

The current social solidarity and political unity in Iran is unprecedented since the revolution. Banners, headbands and signs in green, the color of the anti-Ahmadinejad movement, were prominent before the election and are still on display. No one can predict where this situation will lead and whether Khamenei’s nightmare of a “velvet revolution” will come true.

Earlier this year, in his message on the occasion of the Iranian New Year (Nowruz), Barack Obama became the first U.S. president since the hostage crisis to address “Iranian leaders” and the “Islamic Republic” rather than the Iranian “regime.” The Obama administration had been careful not to take any position that could be seen as supporting a particular candidate in the Iranian election. Obama’s Iran team was surely watching the decreasing support for Ahmadinejad and waiting to see what would happen. While Venezuela’s Hugo Chavez and leaders of the Palestinian Hamas and Egyptian Muslim Brotherhood movements were among the first to congratulate Ahmadinejad, people everywhere, certainly including in Iran, expect the United States to speak out.

This military coup is a turning point in Iran’s domestic and foreign policies that the West cannot ignore. The U.S. reaction in particular is meaningful not only for Iran’s democratic movement but for all democrats in Islamic countries who suffer under autocratic governments. In coordination with European and other nations, the United States should respond to the message being sent by Iran’s supreme leader by condemning the election and backing the Iranian people’s demand for a free and fair revote under the supervision of international observers.

Iran’s people have a living memory of U.S. involvement in the 1950s coup against the government of Mohammed Mossadegh. They expect the Obama administration not to make the same mistake at this crucial time in U.S.-Iranian relations by recognizing the coup carried out under the cover of this election.

It will be easier to bring an end to Iran’s controversial nuclear program and defiant foreign policy working with a democratic Iran rather than the military government that is in power. Iranian society will not forget this historic moment and is watching to see how the free world reacts.

AUTHOR
Mehdi Khalaji is a senior fellow at The Washington Institute, focusing on the domestic policy of Iran as well as the politics of Shiite groups in the Middle East. He is the author of Apocalyptic Politics: On the Rationality of Iranian Policy. First published in .