Let there be Education! 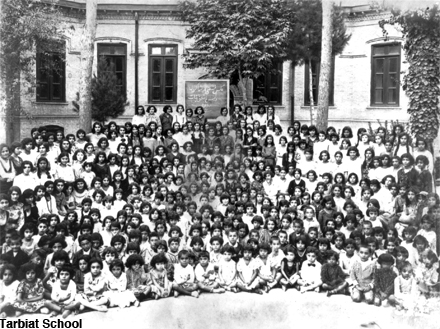 The canvas upon which history is painted; the mirror in which one reflects upon the past; the stones on which marks of civilisation are engraved; and the books in which truths are told; all speak of the glory of ancient Persia. The splendour of her past reflects the beauty and elegance with which she has adorned herself in rearing such seers, poets and literary giants as Sa’di, Hafez, Khayyam, Mawlana and more.

Surely a civilisation that prided itself with raising such poets and philosophers who touched the entire world with their insight, thoughts and literary prowess, would not have flourished without education. Education is the force behind advancement and the fuel to intellectual empowerment. It is the provision, which feeds the soul with understanding and knowledge and which polishes the intellect to shine with gem-like lustre.

Far in the corners of Persian history, as far back as the rule of the Achaemenian Dynasty, children were educated in the arts of reading, writing and drawing through the use of clay tablets. Children’s literature, and fables that taught our young, go back nearly 3000 years; an example of which is the “Assurik Tree”, a legendary debate between a goat and palm tree. The civilisation thrived on the power that such fables and literature exerted on our children by allowing them to dare to imagine and to sharpen their intellects.

The invasion of the country by Arabs, however, and the Muslim influence on the nation, turned a new page in elementary education. With the strong presence of Islam in Iran, young boys started to gather in what became known as “Maktab-Khaneh”. There, they learned to read and write by reciting the Holy Qur’an and received basic education in maths and literature.

Maktab-Khanehs in effect became the nation’s formal system of elementary education until well into the 19th Century, at which time Reza Shah, the inaugurator of the Pahlavi Regime, set in motion his plans for the country’s modernisation.

These Maktab-Khanehs were instrumental in promoting general knowledge amongst the population; but they also served to bring enough literary skills to the pupils who wished to pursue further education in Islamic studies, offered mainly in what was known as “Hawza” — a seminary for traditional Shi’a Islamic Studies. The first of these seminaries was opened in Najaf, Iraq; but Qum, a city in Iran, established its own “Hawza” and became a prominent centre of religious learning — especially during the Safavid Rule.

Against a background, in which education was primarily seen as a tool to raise religious men devoted to Islam, the education of girls was neglected in the extreme. Girls were instructed in such arts as cooking, sewing and housekeeping and were often married off at an early age, barely into their teen years. Few indeed were women who were privileged enough to grow up in such families as would make arraignments for their daughters to be privately educated behind closed chambers. Of course, there were also women who were so endowed with the potential to learn — and so instinctively blessed with a poetic nature — that they endeavoured on their own to learn to read and write and to partake of the nation’s literary treasures.

Nineteenth Century Persia, however, was to see a new era in formal education. Minority religious groups in Iran, who did not see themselves pursuing an education in Islamic studies, or were simply persecuted or ill-treated by the existing systems of education, endeavoured to set up schools of their own — modeled after the modern systems of education in Europe and America.

Although most religious minorities such as Christians and Jews were instrumental in setting up modern elementary schools in Iran; what distinguishes the efforts of the Baha’i community in this path is that the Baha’is succeeded in setting up such schools in the face of fierce persecution and in the very early stages of the religion’s inception.

In fact so prolific are the express exhortations of the Baha’i Faith for the proper education of both girls and boys, that the first Baha’i school was established in the late 1870s — during the life time of the Prophet-Founder of the religion — in a small Northern town known as Mahfuruzak. Mulla ‘Ali, a former Shi’ah cleric who had converted to the Baha’i religion together with his wife ‘Alaviyyih Khanum, started a school for boys and one for girls in Mahfuruzak. Sadly, however, he was taken to Tehran in 1882 and put to death because of his conversion from Islam.

The Tarbiyat School for Boys, was first established by the Baha’i community in 1887 as a small private school in Tehran, but was fully recognised by the government two years later and became widely known for its quality of curriculum as well as its high standards for teaching conduct and virtues. In 1911, a Tarbiyat School for girls was established in response to the emphatic statements of ‘Abdu’l-Baha – the son of the Prophet-Founder of the Baha’i Faith – concerning the importance of educating women.

The Persian staff at this school was supported by a number of American Baha’is such as Miss Lillian Kappes, Dr. Susan Moody, Dr. Genevieve Coy and Miss Adelaide Sharp. The school began with 6 grades for children and special courses for women up the age of 20. By the year 1919, the school was accepting 400 students and a decade later it was offering 11 grades to over 700 young girls. About half of these girls were Baha’is, while the other half were made up of mostly Muslims and a few Jewish students.

What is of significant interest however is that after the establishment of this school for girls in Tehran, many other schools throughout the nation were successfully established by the Baha’i community. Not only did these schools grow in number, but each school grew in size as well over the years.

It was a sad moment, therefore, when one day in 1935, the Deputy Minister of Education under Reza Shah, issued an official order for the closure of the Tarbiyat school in Tehran with the charge that the school had been closed on Thursday 6 December 1934 commemorating a Baha’i Holy Day. This closure was followed by the closing of all other Baha’i schools in the country, the number for which was estimated to have been at least 47 by that time, with at least 8 of them offering secondary level classes as well.

It was indeed a brutal act of persecution when these schools were closed; schools which were mostly funded privately by Baha’i individuals or by the local Baha’i Institutions, inasmuch as the education they offered was given free of charge to the children of poor families — while others were charged according to their means. But even more brutal an act of persecution is the fact that the Baha’i youth in Iran have been for almost 3 decades deprived of attaining higher education because of their religious beliefs.

A nation that had always shone with the splendour of its rich culture, exquisite art, lustrous literature and gleaming civilisation sadly has the world in thrall with the agony that “education” — the very element that had cultivated the culture and nourished the arts and sciences in the land — is now being barred from such a large segment of society.

Iran is sure to reclaim its glory one day! That day, we will come face to face with a nation that is free of prejudices and liberated from oppression and inequity.