MON CINEMA: The Timeless Legend of Rostam and Sohrab (1971) 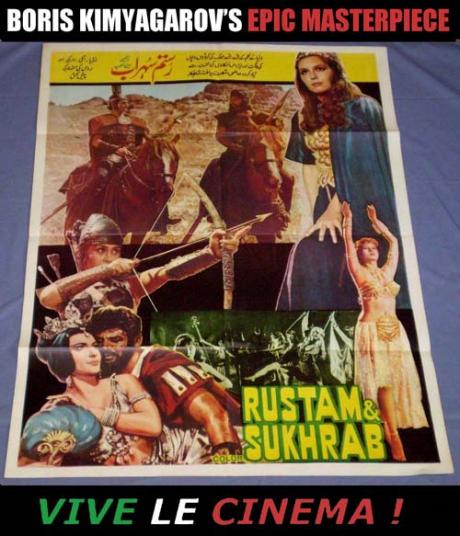 In tribute to all the Rostams of Iran who today are bravely fighting the IRI Tyrant in the streets of Tehran, Shiraz and other towns of Iranzamine. Here is Tajik director Boris Kimyagarov’s 1971 cinematic epic tribute to Persian Poet’s Patriotic Ode.

The Timeless Legend of Rostam and Sohrab also known as The Legend of Rostam (1971) and the Tajik Title is Rustam i Sukhrab with a script by Grigori Koldunov, photographed by cinematographer Dovlatian Khudonazarov and a music score by Arif (Aref) Melikov. The Cast was essentially Tajik but also included Russian and Georgian actors including Svetlana Norbayeva, Sairam Issayeva, Bimbulat Vatayev , Otar Koberidze, Mahmud Bakhidov. What personally fascinated me about this movie which is now available online (see below ) in Persian/Tajik as well as Russian (see Below: Authors Notes) was the striking resemblance of the sets, costumes as well as some action scenes to German Hollywood director Wolfgang Petersen ( ) 2003 blockbuster starring Brad Pitt in his first epic role as Achilles, Peter O’Toole (King Priam), Orlando Bloom ( Paris), Eric Bana (Hector), Diane Kruger (Helen) and Saffron Burrows (Andromache) to name a few. The story of Helen of Troy and the Trojan War being situated in Anatolia present day Turkey may explain some of these unexpected yet striking similarities between two films produced less than 40 years apart. The similarities stop here however for the two stories are very different even if the themes of Life vs. death (mortality vs immortality), father vs. son, brothers in arms or sacrifice are common denominators between the Homeric tale of Troy and the Epic Shahnameh of Ferdowsi. Entirely shot in Cinemascope and in Technicolor the film is a transposition of the legendary poem and the dialogue maintains the lyricism of the Persian Poet’s verse. It has all the ingredients that made the success of the contemporary Epic and Sword and Sandals films of the Italian Era even if at times the dialogue may seem slow ( it is however easy to understand with a minimum of knowledge of Persian) and the stunts at times obsolete to today’s standards they are nevertheless exciting and gripping to watch particularly the battle scenes between Gurdāfarīd the female warrior and Sohrab, who has just become commander of the Turanian Army. The final horse stunts during which Gurdāfarīd rides away from her pursuing enemies is also breathtaking. The story can be summarized as such: As smoke on the hill tops signals the arrival of foreign invaders on the Persian Steppes of Iran, we learn that the young and dashing Sohrab, has been named as head of the Army of the Shah of Turan ( Iran’s most dangerous foe) he is asked to defeat Rostam the greatest warrior of Iran. As Sohrab bids his mother princess Tahmineh goodbye he ignores that his real father is Rostam because of his mother pledge never to release her husbands real identity. As the tragedy is about to unfold Sohrab will be challenged by different warriors amongst which the beautiful but cunning Gurdāfarīd. The epic battles on the Persian Steppes will lead to the Timeless Legend of Rostam and Sohrab’s fatal encounter.