The Greenest of the Green Fields 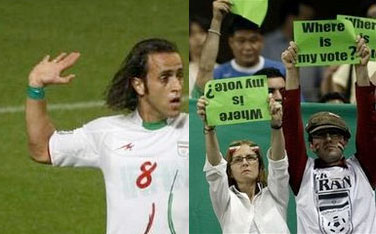 Iranian players prepare to enter the green field of Seoul “World Cup” stadium. To remain in the world cup hunt, Iran must win on the road against a powerful great Korean team.

A “football nation” as Iranians think of themselves prepare to focus their eyes on the green field of Seoul to watch “team melli” play as affectionately Iran’s national team is referred to. Team Melli means “national team” or a team of the nation in the Persian Language.

Eyes will be on Seoul for the next 90 minutes and then feet, hearts and minds will leave the rooms through the doors of houses entering the streets of Tehran, Shiraz, Isfehan, Tabriz, Mashahd, Ahvaz and many other cities to walk peacefully and protest because “their votes were stolen” in the presidential election.

Iranian origins of all ages, excited about football, with signs of stress from worrying about the unrest and explosive nature of what could take place in Iran, depending on their time zone, wake up, get ready for work, have lunch or eat dinner.

For the first time in my life, I witness people discuss openly in weblogs, discussion forums and talk shows that “why are we playing a football game in these times?”

For the first time in my life, I feel that football that was the catalyst to unify a nation in good and bad days was in danger of becoming irrelevant.

“Our story must be told!” they shouted on the streets of Tehran as they marched, men and women, young and old, walking, limping, on wheelchairs and in the arms of their parents.

This is not a football story I told myself.

My brain ordered my heart to keep politics and sports separate from each other as I was witnessing events so amazing from people so courageous.

Football, is a passion, is love, is a way of life and has been my source of refuge in good days and bad nights. I will not mix the two I assured myself.

In front of the world view, hidden behind the clicks of our mouse keys and behind the text messages of Tweeter, pages of FaceBook and videos of YouTube and iReporter, the “story” of a nation is being told.

Every day as I let my pen run loose on paper and tell the stories of world cup qualifying matches, I wonder how the team melli players feel in their training camps.

The game is about to start.

The field is a beautiful green. Thousands of kilometer away, Color of Green has become a symbol of the “Green Wave” of Iran which represents the opposition in millions of people that are braving street demonstrations every day.

It is 4 AM in California. My eyes are not still fully open but in a moment so incredible and so powerful, they open wide and want to jump out into the TV screen. Six Iranian players are wearing Green Wristbands.

As powerful as the videos and stories are from Iran painting a picture of nation in search of her course of destiny in history, while building the history one demonstrator in Green at a time, the sight of Iranian players respecting their nation is as heartwarming as the stories and videos.

Football is once again relevant in these days as Iranians struggle to get their message out to the world. Yes Iran had to win and yes Iran played very well for their coach Afshin Ghotbi who himself performed remarkably against all odds to put Iran back in a position of qualification. Iran was up until minute 82 but a beautiful goal by Manchester United based Ji Sung Park crashed the Iranian football dream.

The other dream keeps going on.

Six brave players made football so relevant that they became the talk of all Iranians and in an irony that will be discussed for many years to come, a team that did not qualify for the world cup qualified once more in the hearts of her nation.

They were Team Melli.

“Our story” must be told cried the demonstrators in the streets. They held photos captured from TV screens of the players with green wristbands.

Even the disputed President of Iran used and abused football as a symbol. He called the opposition, the people that go in hundreds of thousands into the streets supporting Moussavi who they believe was cheated in the election as “dirt” and as those leaving a Football (Soccer) match upset because their team lost. He compared the demonstrators to soar football losers.

The beautiful game of football must not be politicized yet when players representing a nation in distress and in need of world audience expressed their support for the “Green Wave”, they cut across the political argument and turned it in to a human story and a story of life.

“Their story” was told in Seoul by football players and was repeated by every news agency.

June 17 was the day that Iran’s football became the symbol of a nation in distress.

Football became an instrument promoting human being’s most cherished desire in life; the desire to be free.

For my football,my passion, my team melli, my green nation.