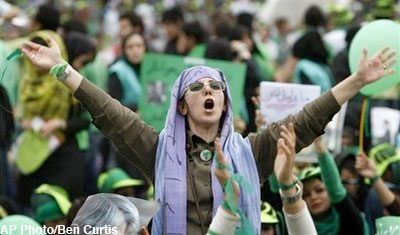 The Iranian people’s outcry for freedom is a reaction to 30 years of suppression of their freedom of speech and the repression of their human rights.  Their cry calls on all freedom-loving people, democratic institutions and governments to unite in condemning the latest anti-democratic actions of the Iranian regime.

We, the Iranian writers, who have witnessed numerous acts of injustice by the Islamic Republic aimed at suppressing the most basic human rights of our people, and who subsequently live in exile or migration while standing together with the honorable Iranian people (especially the intelligent youth who are voicing, in the most peaceful manner, their demands for freedom, social justice and democracy in Iran) appeal to you, the writers and scholars of the world, to help them by demanding an immediate end to the Islamic Republic’s widespread suppression of the Iranian people