Iran at a crossroad 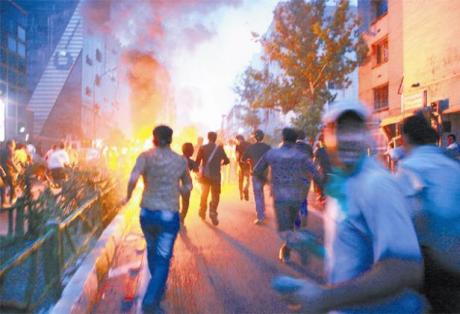 It is a fact that the people’s movement within the past two months have caught Mir Hossein Mousavi by surprise. The bloody crackdowns, murders and arrests showed the naked truth about the nature of the Islamic Regime , its supreme leaders Ayatollah Khamenei, its president Ahmadinejad, its Guardian Council, its Parliament, its supporting clergy, its Basijee forces, its revolutionary Guards as well as its media. Anyone who may have had any remaining doubts about the nature of this regime now is assured that the Islamic regime in Iran is a full military dictatorship wrapped in empty slogans under a façade of a republic which has no hesitance in murdering its own people in order to maintain power. By uniting Iranians to vote, the opposition, using regime’s own claim to a republic, attempted to bring about a change which ultimately resulted in an end of any more claim to an Islamic democracy in Iran. In this process Iranian again realized the power of unity and a mass movement.

While Mr. Mousavi had been waiting for the results of Guardian Council decision and Hashemi Rafsanjani’s behind the scene efforts to remove the supreme leader from power, Mr. Rafsanjani has not publically made any comments since the election. However any such unnecessary delays will only result in the regime gaining upper hand as well as loosing the public momentum and coherence.

Mr. Mousavi must either immediately and actively lead the movement to a general strike and a true non-violent civil disobedience with the goal of stopping the economic machine of the Islamic Republic or he should officially pull out! Any new attempts to sporadically send unarmed youth in front of armed militias as has been happening in the past couple of days are nothing but adventurism resulting in unnecessary loss of lives and more arrests. As long as the peaceful mass demonstrations in 100s of thousands could be maintained such calls to march can be the right move but the recent calls to show up in the same known spots! without any specific planning while the military and Basijees are awaiting to crush people no longer serve any tactical or strategic purposes.

At this point the Islamic Republic System as a whole with all its mighty force has stopped in front of the Iranian people and as much as Mr. Mousavi still has his beliefs in such system, he must also realize that the election is over. The results were announced and although it was not necessary to waste another precious 7 days to know the answer, its Guardian Council as expected has approved the results.

Mr. Mousavi has a choice to make: to accept the system with all its flaws and remain within it as an opposition which in that case he will be dealt with by the regime sooner or later as those before him have or to accept the reality and rely on the power of people who have given him his historical status and to call for an all out National Strike and removal of Khamenei from power.

Mr. Mousavi is no longer a presidential candidate and the elections are over and Ahmadinejad is the president as a result of a electional coup supported by Khamenei and a full military crackdown.

As for Iranian people there still seem to be a lack of leadership and if the efforts of Mousavi, Rafsanjani and alike do not reach any results , with the lack of true leadership that exists any more encouragement of unarmed Iranians to face the armed forces of Islamic regime will only result in unnecessary bloodshed without any specific gains. At this stage anymore such calls without strategic planning are nothing but adventurism that result in unnecessary crackdown, arrests, injuries and death. Continuance of the status quo and adventurism also play in to the traps of the same old usual opportunists of different camps from ultra right to the left who have again come out of the woodwork trying to take advantage of the situation for their self-serving gains.

Short of the success of the efforts within the system to remove Khamenei from power, a lasting national Strike combined with non-violent civil disobedience are the only remaining civil tools that are available to Iranian nation. The elections are over.