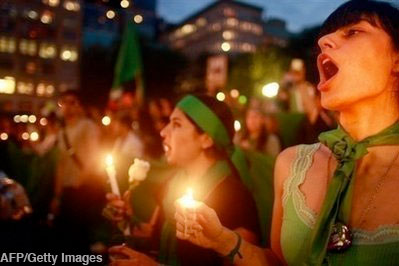 For over 30 years the Islamic Republic of Iran has managed to hold on to and consolidate its power through a combination of repression, brutality, spreading of fear and remaining united in the face of their enemies. All of that changed on Friday 19 June when their supreme leader, Ali Khamenei, reduced himself to the ranks of a factional politician and took sides in Iran’s disputed elections. Khamenei’s words in support of a falsified election signalled the end of the Islamic Republic’s hard-earned legitimacy and moved the country and its people into uncharted waters. Iranians inside and outside the country, long accustomed to having their hopes for an end to tyranny dashed, have smelt blood and a movement has commenced which can have no other outcome than an end to the Islamic Republic of Iran and all that it stands for.

In light of the events of the past few weeks it is worthwhile to make a few points:

As Iranians our interests are aligned: whether we live inside the country or outside, whether we are pro-Moussavi, pro-Karroubi, pro-Mossadegh, pro-Mashruteh, or pro anything else we are all Iranians and the most important objective at this juncture is to be united in the face of what will be an all-out assault by a theocratic and corrupt regime which has nowhere to run and will use all means at its disposal to hold onto power.

We need to set aside our factional differences and focus on our common objectives. Any differences, perceived or otherwise, are likely to be capitalised on by the regime to gain a public relations advantage and to more aggressively suppress the movement. This means that we all need to maintain our discipline and respect each until the regime has collapsed (and hopefully for a lot longer than that!).

The regime will not fall overnight. It took over a year of sustained pressure on the Shah for him to concede defeat and leave the country. And unlike the Shah, this regime has no lines which it will not cross. This means that as Iranians we need to do what we can to keep the pressure on, to be always vigilant and not be disheartened if the desired results are not achieved overnight.

I know many of you, like me, have been shaken to the core by the story of Neda. Her death was senseless, brutal and unfair and there is no way to express the anger, sadness and shame that we feel. She did not leave her house that fateful day to be a hero or the angel of Iran. She probably wanted nothing more than to be able to live a normal life, something denied her by the Islamic Republic. I, for one, am channelling my feelings for the atrocious manner of her death (and that of all the others, young and old, who have perished at the hands of this regime) to do what little that I can to bring on its demise. We cannot get back the last 30 years of our lives but today we have an opportunity to make a difference in the course of history and to ensure that our children and their children will not suffer the same indignities and heartaches as us.

PrevPreviousWhat the Arab world is–and isn’t–saying about the protests in Iran
NextLessons from Iran, 1977-78Next