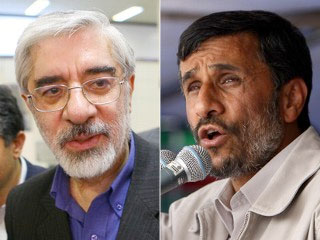 The disputed Iranian election of June 12th returned Ahmadinejad to office with a huge margin of votes over his main rival, Mousavi. Given Ahmadinejad’s track record for the past four years, there is a fear that he may interpret his official victory as an unconditional mandate to continue business as usual contrary to the demands of the opposition: an opening up to the West, more freedom, cutting back on handouts, and more.

There is no hard evidence to either support or dismiss the official results. Recounting the votes will not resolve the dispute as a suspicion will always remain as to whether some of Mousavi’s votes were discarded. Rerunning the ballot vote has been ruled out by the ones holding the power. So there is no sure way to determine who truly won the election. However, we can say at least two things:

On one hand, the recent demonstrations proved that a large number of people are deeply discontent with the current government in Iran. Even if Ahmadinejad truly won the election, he has to address this dissatisfaction and make policy changes that unite the nation. If a president represents all the citizens, not only the ones who vote for him, then it is his duty to design policies that reflect the collective will of the people. The interests of the majority voters usually weigh heavier than the interests of the minority, but if there is a large minority who is very unhappy, then a president must find the middle ground politics that reconciles both parties. Whether Ahmadinejad is capable or willing to do so remains to be seen. The violent and indiscriminate crack down of peaceful demonstrations reinforces the impression that his authoritarian style will most likely go on.

On the other hand, an opinion poll taken three weeks before the election, published in , discovered that Ahmadinejad at that time had a popular support well above other candidates. This poll has been criticized as unreliable as many of Ahmadinejad’s supporters may have shifted side over to Mousavi within the three weeks of campaigning prior to the voting. Also, about a third of the respondents had answered that they had not yet decided who to vote for at the time the poll was taken. There is a chance that a great majority of those voters who had not yet decided or those who switched side cast their ballots in favor of Mousavi on June 12th, making him the real winner.

However, the possibility according to the opinion poll that only three weeks before the election Ahmadinejad had a larger base of popular support than his opponents reveals that he was not perceived as a completely suppressive dictatorial figure by many Iranians. The poll demonstrates that up until three weeks before the voting a sizable portion of the population favored Ahmadinejad to run the office for four more years.

Furthermore, the argument that about a third of the respondents had not yet made a decision only three weeks prior to the ballot vote shows that Mousavi by no means was the obvious and unreserved people’s choice. At least up until the poll was taken this portion of the electorate did not have a clear-cut preference for Mousavi, even if they ended up selecting him in the end. In fact, only 14% supported Mousavi at that time according to this poll. Thus the opinion poll, although only a survey and not an actual and reliable vote, at least indicates that Ahmadinejad was not totally out of touch with the Iranian people. Some of Ahmadinejad’s policies must have been supported by many Iranians, even if on balance Mousavi truly won their votes.

The implication of this is that Mousavi too did not have an unconditional mandate to reform the government policies had he been sworn in as president. He too would have needed to find the middle ground politics in order not to alienate those who favored Ahmadinejad or some of Ahmadinejad’s policies. In the heat of the protests Mousavi seems to have been hailed as the savior who would have transformed Iran over night. Had he as president radically changed the policies of the government over night, he too might have faced the same degree of popular resentment, only from a different direction. But he could have changed government policies gradually by buying support over time. Whether he could or would have done so, we may never have the opportunity to witness. His track record, however, exhibits eight years of premiership in the Khomeini era; perhaps the most repressive period in the history of Iran.

As a concluding remark, if a middle ground is found to unite the people and reconcile the country’s internal and external interests, the collective will of the people is served regardless of whoever is in charge. But in my opinion neither of the two men has postured to do that.