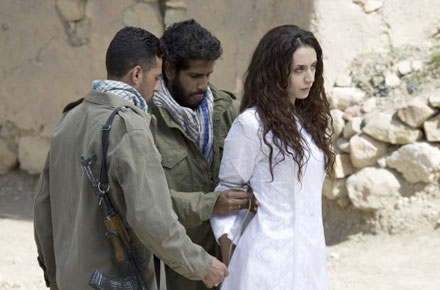 As an Iranian expatriate, like many of you, I have been riveted by the images of the defiant young Iranians challenging the brute forces of repression.  Faced by unparalleled violence they raise their green banner of hope and peace, and dare to dream of victory through love and poetry. The red drippings trickling on that green expanse of optimism and youthful bliss make perfect scenes for nightmarish surrealistic sequences in horror movies.  The innocent yet determined faces of young Iranians, insisting on demanding their basic democratic, and human rights stirs deep emotions, even among the most cynical and jaded observers of politics.  You want to shout to the elder cannibals to stop devouring the youth, to stop trampling on their hopes and dreams, to stop accusing them of foreign conspiracy, because they are the most authentic yearnings of their generation.  They are voicing their discontent in the most civilized manner, through non-violent political participation, heed their call hence the next wave may not be green but red.

During this highly emotional and volatile period in our history “Stoning of Soraya M” is released and what a timely arrival as if Hollywood had possessed a looking glass into the future.  At the first glance, a movie that exposes the brutality of theocratic regime and its repressive laws and customs must be welcomed by all freedom loving Iranians, but the whole project reeks of an odious distortion. Presumably, in pursuit of freedom and justice we must embrace any document that exposes the brutality of evil and dark forces that extinguishes life and liberty.  But the film makes rather spurious presumptions, and that is precisely the problem with the film; Iran is an arid land dominated by forces of darkness and evil doers.  A culture so wicked that even Soraya’s own children participate in stoning her, and the whole village is complicit in this despicable crime. Other than Zahara (Shohreh Aghdashloo) nobody objects to this savage punishment and our courageous protagonist pleads to the Foreign based journalist to be her voice because “here women have no voice”.  What a shameful and malicious claim, in the name of exposing patriarchy, the movie negates Iranian women’s the most basic element of human expression, voice.  With such a simplistic and shallow characterization, the movie blithely negates more than hundred years of Iranian women’s struggle for equality. Are we expected to believe, that during the past thirty years, with the imposition of archaic and repressive “Sharia” laws, the Iranian women have passively acquiesced and waited to be rescued by magical forces from outside?   Are we supposed to forget the tireless efforts of Iranian feminists, social workers, journalist, and lawyers in exposing the brutality of “hudud” punishments, and their success in forcing the judiciary to declare a moratorium on stoning in 2002?  The last case of stoning perpetrated against Mr. Jafar Kiani in a village in north-west Qazvin province in 2007, created such a firestorm that the life of his partner, Ms. Mokarrameh Ebrahimi had to be spared.  Are we expected to close our eyes to the dynamism and vitality of Iranian civil society, and accept the dark and apocalyptic vision presented by the film?  The answer is a resounding, Yes, because like any piece of propaganda, truth, context, and nuance is no concern of the producers of this gory celebration of violence.

Sorya M. depicts a primitive, evil, dark Iran that serves only the agenda of war mongers that have consistently refused to contemplate the possibility of non-military resolution to the conflicts in the Middle East.  One could not possibly expect more from an arch- conservative, Cyrus Nowrasteh, and his cohorts.  He is the same Nowrasteh who brought us the detestable “the Path to 9/11” docudrama that insidiously suggested that President Clinton and “liberals” were responsible for the tragedy of the 9/11.  The distortion of this supposed documentary was to an extent that even a conservative denounced it as having “zero factual basis”.

The same conservatives that have tried for the past thirty years to institute their brand of American style theocracy by outlawing abortion, criminalizing homosexuality, denigrating minority rights, forcing prayers at school, placing Ten Commandments in public buildings, are now shedding crocodile tears for Soraya M.s of the world.   The same conservatives that in the name of “family values” demonize feminism are now ardent supporters of women’s right in Iran.  The same neo-cons that in the name of freedom and democracy have celebrated the war and devastation in Iraq are now mourning the loss of human rights in Iran.

David Horowitz, a close associate of Mr. Nowrasteh, from the far right celebrated the “War on Terror” in no ambiguous terms. He declared triumphantly that “Baghdad is liberated. In the days to come let us not forget that if it were not for one man, and one man alone-George Bush-the people of Iraq would not be celebrating…”.  Horowitz accuses his critics of sympathy with terrorism, but only a sadistic and twisted mind of a terrorist would describe the war and devastation in the streets of Iraq as celebration. The same conservatives that under the guise of religious freedom promoted “The Passion of the Christ” to inflame religious hatred and bigotry are pursuing the same agenda in the Middle East. Then the American liberals and particularly Jewish intellectuals explicitly and rightly condemned the deplorable repercussions of such movies.