Where is my democracy? 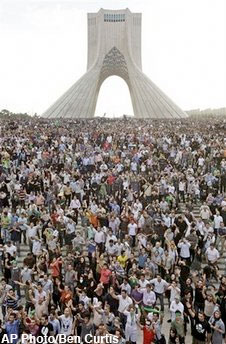 The post-election turmoil in Iran has once again brought Iranian society and politics under the spotlight. Political experts, foreign officials, expats, and even curious observers have weighed in on the topic in one way or another. We may, however, classify all that is occurring outside of Iran as merely an incidental offshoot of a far more substantial, though not yet substantive, dynamic unfolding within the country.

Contrary to the claims of Iran’s leading clerics, Britain and the United States are in no way responsible for the uproar that has been triggered by disputed election results. This is not to say, as the British Secretary of State for Foreign and Commonwealth Affairs has asserted, that such a charge is “wholly without foundation.” Both Britain and the United States would not hesitate to once again meddle in Iranian affairs as they did in 1953, if circumstances permitted; regrettably for the imperialists, circumstances have changed!

Iran today is a thoroughly independent country that no longer suffers from zafe-esteghlal. In fact, the demonstrations are not sourced in foreign contrivance. Once the layers of rhetoric, misconception and interested interference are stripped away, we are left with two fundamental elements, both of which are wholly domestic in origin and nature. One of these is the now manifest desire of so many Iranians for change. The other element is the conflict that is playing out among the top echelons of the Iranian regime, with Mousavi representing one faction and Ahmadinejad another.

What strikes one as profoundly important is the participation of ordinary Iranians en masse in what is nothing less than a demand for authentic democracy. “Where is my vote” is the question that Iranians are asking. If we deconstruct this question into its constituent parts, we have before us some of the critical components of liberal democracy, a la “the West.” The “my” represents the individual citizen who, after actioning her/his faith in the power of the vote, now demands to reap the benefits. The “where” represents that streak of unrelenting, yet reasoned skepticism that is the patrimony of open societies that are not averse to questions and questioning. And the emphasis on their “vote” signals a most critical awareness that is sadly taken for granted in some Euro-American societies (hence low voter turnout), namely the sheer power and importance of an otherwise simple act.

The prevalence of this question has not arisen from the ether, nor is it coincidental. Rather, it seems that Iranians, who are on average 25 years old, have, over the course of 30 years, grown tired of seeing and living in a genuinely Islamic polity. The development, or perhaps more fittingly, the degeneration of the revolution has also produced an entire generation of Iranians that want a different mode of life altogether, one that is not permeated by religiosity. This generation of Iranians has for the last three decades seen the ugly face of political Islam and Islamic existence on a daily basis. Applied broadly, think Karl Polanyi’s notion of ‘double-movement’ appropriately captures the simultaneous degeneration of an Islamic polity, and the consequent reorientation of Iran’s youths towards things non-Islamic ie. Western popular culture, secular democracy, irreligiousity etc. Thus, the question “where is my vote” represents a longing for freedom among Iranians that has been fermenting for some three decades; for this reason, it evidences a certain democratic maturity thoroughly lacking in the region.

It would be a tragic mistake, however, to see Mousavi as a leader that is “of the people,” to use Lincoln’s words. The Western media is patently wrong in its designation of Mousavi as some sort of Ghandhi or Mandela. Rather critically, Mousavi is not leading the call for greater democracy and liberty in Iran, he is merely following it; and if the people voted for him, it is because the Guardian Council’s electoral filtration system weeded out so many candidates deemed insufficient for lack of Islamic qualifications and credentials. It is worth remembering, that the same Mousavi was Prime Minister of Iran when, in 1988, Iranians prisons were purged of all opposition political prisoners, including moderate Muslims, liberals, nationalists, and leftists; depending on the source, somewhere between 5000 and 30000 political prisoners were executed in just 5 months. And now this vile man is being touted as a man of peace, an architect who builds rather than destroys and who wants fundamental changes; nothing could be further from the truth.

Granted, Mousavi is calling for some reforms, but these are strictly within the confines of an Islamic state. Mousavi does not want to disrupt the Islamic fabric of the current state apparatus; genuine liberality, secularism, and uninhibited democracy are not a part of Mousavi’s discourse. Mousavi and his backers, chief among them Rafsanjani, are at odds with the more conservative hardliners such as Khamenei and Ahmadinejad. The issues include domestic economic and political power, as well as foreign trade agreements. It seems that Rafsasnjani, a very wealthy Iranian cleric and entrepreneur wants to see more economic agreements with Western states, while the hardliners want to perpetuate the revolutionary fervor and continuing leading a pseudo-autarchic existence. However much these two groups may disagree on specific policy options, they fundamentally agree on the need to retain an Islamic state and to keep ordinary Iranians outside of the halls of power.

These two factors comprise the fundamental dynamics that is now playing out in Iran. The hopes and aspirations of ordinary Iranians is at one end of the spectrum and the conflict between conservative and reformist factions at the top of Iran’s political apparatus at the other. Now that the Persian thoroughbred is out of the gates, i.e. Iran’s people, it remains to be seen whether the Mousavis and Ahmadinejads will be able to subdue it. Perhaps we are now beginning to see the first inklings of what will in the long-term prove to be substantive changes towards authentic democracy, of the secular and liberal variety, in Iran.