Civil disobedience: next phase of protests 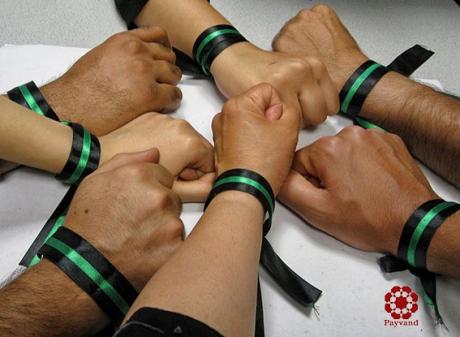 All things said, IRI rulers’ current decisions have been consistent with their thinking and actions about Iranian people and voices of dissent–intimidate, persecute, torture, and if necessary kill all those who speak up.  People’s limited artillery to fight the system has been most recently used to cast their votes of protest against Khamenei’s obvious favorite presidential candidate, Mahmoud Ahmadinejad, and choosing to vote for his opponents Mousavi and Karroubi.  Even that legitimate gesture of protest was not tolerated and Iranian elections had to turn into the circus that they did, ensuring a landslide victory for the detested candidate, increasing his votes from 5 million to 24 million.  In their second act of civil disobedience, crowds took to peaceful demonstrations on the streets, facing violent confrontations, sticks, and bullets.

The Supreme Leader’s “orders” for all to accept his decision and to move on have also faced unprecedented disobedience.  Both Mousavi and Karroubi issued statements objecting to the fraud and the subsequent mockery of a “re-count” by the the instigator of fraud itself, the Guardian Council.  Such defiance after the Supreme Leader’s “verdict” on a dispute is unprecedented.

Simultaneously, clerical organizations which had previously been supportive of the IRI leadership have issued statements condemning the fraudulent elections and the ruthless treatment of protesters.  This also has been unprecedented.

People’s actions of civil disobedience have gained momentum.  People wear green and hunk their horns on the streets (a lot more so than usual!).  The nightly Allah o Akbar chants on Iranian rooftops continues.  For the first time ever, people have started talking about boycotting products advertised on IRIB, to lodge their protest against its skewed and irresponsible reporting of recent events.  Emails are being circulated about movement of personal savings from one bank to another, attempting to disrupt the first bank’s operations.  People are shoving Mousavi flyers into mailboxes and charity boxes on street corners, and there is news of “night letters” (Shab nameh) distributed to homes, supporting Mir Hossein Mousavi.  Writing slogans against Khamenei and Ahmadinejad on city walls and on paper currency is also an ongoing activity.

There is now talk of short term strikes during the coming days to commemorate 18 Tir, the anniversary of the 1998 Tehran University student uprising and murders, and to protest the murders and imprisonments of the June uprising protesters.  At this point there is no talk of longer term strikes, which is natural because workforce strikes are the ultimate form of civil disobedience and they are usually reserved as last steps in separation of people from their governments.

It may look as though people have been intimidated enough to stay home.  Frankly, if there were going to be further losses of human life, I am glad people have gone home for now.  It is evident, however, that the anger and the legitimate causes for protest have not  disappeared.  I think we will see manifestations of this protest more and more in civil obedience over the coming months.