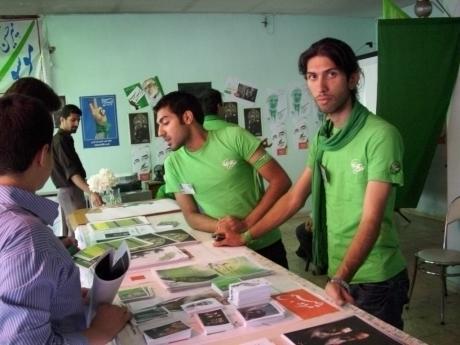 Photo caption:  this is one of the thousands of Mousvai’s campaign offices in Tehran.  I asked someone behind the desk for permission to take pictures.  This particular office was in a very busy thoroughfare and they had music blasting outside and giving out free ice-cold cherry-syrup drinks (sharbate aal-baaloo). Bah! bah!

When I visit Iran I sense that I am truly in another world.  Another world so familiar and enchanting.  Every little thing routine and mundane to others becomes an adventure for me.  For example, getting up in the morning (8ish) and walk to our local corner naanvayee (bakery), stand in line, get hot (hand burning hot 🙂 fresh barbari bread and listen to someone chat with the baker or sometimes people in line.  Or watching people debate at newsstands or getting private cabs (called ajans) and talk or listen about daily politics.  If they are not in a mood to talk I usually throw in a word to get something going.  I can’t get these kinds of dialogues in America, what for?, and even if I do it is not the same, it is not homey!

I’ll go through my recent visit to Iran as it happened and won’t focus too much on the protests after the election, because as I said in my earlier blog due to my family’s pleas and concerns I did not participate and there are news about the protests here that you can’t get back home because of regime’s internet and media blockade.  When I first started to write I thought I could write one blog but as pages piled up I decided to post them in few parts so as not to bore everyone with one long and seemingly endless story.

So let’s start Part 1 with the debates and before I forget these are my memories and interpretations and I have no doubt some would disagree but that’s ok you can write your own blogs.

The TV debates were awesome.  It was the first time people were seeing back and forth ridiculing of the opponents and criticism of the Govt on state run TV.  I watched each one and even though they would start at 10 or 10:30 or later, people would stay up to watch and discuss the next day.  And discuss they did.

Having watched the American presidential debates since Reagan-Carter I’m used to watching and seeing who ends up the apparent winner in the debate, not in the election, but in the debate.

If you notice when Ahmadi interviewed with foreign media prior to this election campaign he talked so generally like a mullah that the interviewer would give up and say the hell with you let’s end it!  But in these TV debates he did not generalize and would attack specifically like a hawk!

First of all he’d wear an Iranian flag pin (remember Obama’s flag-pin saga?!) while others didn’t and his main strategy was appeal to nationalism and using his Govt as the god given Islamic gift to everyone where it should be beyond criticism and anyone who says otherwise is a non-believer or at least a wishy-washy believer.

The moderator was a useless half-bearded half-shaven ugly ass, much uglier than Ahmadi, wearing a wrinkled shirt and a mismatched jacket.  He was truly useless.  While moderators in the American debates go for the jugular and are tough on candidates and control the debate, he was there only for “decoration”.  By decoration I mean “Islamic” decoration which by regime’s definition should be cheezy or ghetto.

The first debate was between Karoubi and Rezaei.  This one was boring.  Rezaei was taking positions about section 144 of the constitution about privatization which was his pet peeve throughout his campaign and these debates.  He has received a PhD in economics after the revolution and considering he considers Islamic economy as having a better foundation/potential than any other economy in the world, one could only imagine his PhD’s worth.  In fact, considering his looks I think he could be Mahmoud’s subject on many of his cartoons! LOL 😉

Karoubi talked about rule of law and how sometimes it is ignored or swept under the rug.  Karoubi was always the most radical of the candidates and actually liked by many because he was a vocal and known critic of Ahmadi.  Almost all of Mousavi’s supporters liked Karoubi and followed his newspaper Etemad Melli (National Trust) and his positions which Mousavi would often not take, out of being politically cautious.  Anyway, both candidates were calm and polite and end up lending watermelons to each other.

I don’t remember of any highlights that stayed with me and thought this debate was a tie.