Rafsanjani’s savings for a rainy day 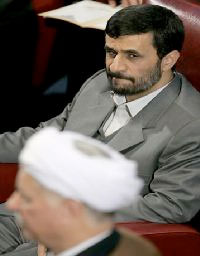 Hashemi Rafsanjani, head of expediency council and former president of Iran, after several weeks of absence as temporary Friday sermon is scheduled to address this week prayer.

For the first time since June 12 election Mir Hossein Mousavi, the former prime minister who many Iranians believe was the real victor in the election and his close ally in this race former reformist president Mohammad Khatami will participate at the sermon which is their first public appearance in an official event after a week-long turmoil provoked by a probable vote fraudulent in Iran.

Rafsanjani head of expediency council will deliver his first Friday prayer this week since last month’s disputed presidential vote according to official sources in Iran .

Some interpret this as a sign or prelude of a probable national reconciliation between the supreme leader Ayatollah Ali Khamenei with the opposition front leaded by the defeated candidate Mir Hossein Mousavi and supported by Hashemi Rafsanjani.

Ayatollah Seyyed Ahmad Khatami another Friday sermon who called on the government to punish “leaders of the riots, who were supported by Israel and the US, strongly and with cruelty,” last week asked Hashemi to speak up for Chinese Muslims who are under pressure for practicing Islam. He called the Friday speaker to speak for unity.

But there is not any sign of a probable reconciliation and the idea is seemingly super optimistic.

Mousavi announced recently that he is to stage a political front to pursue the fraudulent vote. His Tuesday unprecedented visit to family of Sohrab Aarabi, a 19 year old supporter who lost his life, still un-known happened during demonstration or executed in Evin prison, and other activities are signs of his certainty to revive his right to presidency and people’s vote.

Mohammad Reza a political activist and journalist in Tehran who prefers not to be referred by his last name said in a telephone interview with times: “it is very complicated. The are more signs of plot rather than reconciliation.”

Kayhan, a pro-government newspaper in his editorial asked true believers of the Islamic regime for a strong presence at this Friday prayer and asked them not to allow fake prayers, pointing indirectly to Mousavi’s supporters, who do not know how to spell rituals of Friday prayer to fill up the holy hall of Friday prayer.

The noontime prayer is mostly held at Tehran University which is guarded by a special guard from Thursday nights to the end of the Friday prayer. Many interpret this as an order to filter Friday prayers and not letting Mousavi’s supporters to enter the campus.

Kayhan also pointed out that these fake Friday participants in downtown Tehran plan to stage unrest, in what looms as a possibly violent showdown between protesters and the government supporters.

Mehdi a businessman and a former member of Basij in Tehran told our reporter that he has been informed that Basij regional commanders called active members to participate at this week Friday prayer in order to blind the eye of mutiny, a phrase used earlier by Kayhan editor disgracing Mousavi’s efforts.

There are number of experts who believe that Hashemi is being ordered to pray the sermon and this is a chance for hard liners to rift in reformists’ camp.

Ahmad another journalist who asked to be mentioned only by his forst name for security reasons said in an online interview: “Hashemi will face a big number of pro-government prayers on Friday who chants for Ahmadinejad. He will have naturally two choices. To speak up for Mousavi which will receive harsh chants by prayers or beating round the bushes which will disappoint reform supporters. But he is the ace of Iranian pro-reform politicians and he may find a way to manage the mess.”

Facebook and twitter, two major social networks employed by Iranian protesters to convey their messages in the absence of ordinary ways and text messaging block out by the government are packed with the messages and pieces by Iranian youth who encouraged each other to show up early at Friday prayers and to grab seats nearest to the speaker so they can convey their message of protest in a way that Iranian state television, which usually broadcasts the sermon live cannot ignore.

Seyyed Ibrahim Nabavi, a famous Iranian satire journalist, in his recent piece also posted and recommended in face book urged Hashemi to speak up for protest and encouraged him to rely on public power.

Hashemi 75 year who heads the Assembly of Experts, the only body with the authority to unseat the supreme leader, has been urged to use his savings for the rainy days as there might be no other day for him, criticizing his pragmatism .

“Now he has nothing to loose,” says Minoo a political science doctoral student at Tehran University in a chat interview on Facebook. She said: “This is the most important Friday prayer after the first Friday prayer at Tehran University by Ayatollah Taleqani, a senior Shi’a theologian and a founding member of the Islamic Revolution and the first sermon for Friday Prayer in Tehran after the fall of Iran’s interim government — assassinated in 1979. Ayatollah Taleqani wrested public diplomacy to stress the Islamic side of the Islamic Republic and now, it is Rafsanjani’s turn to tenure for the Republic face of this coin.”